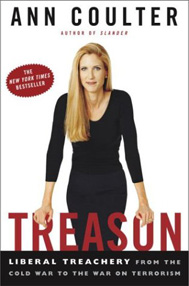 In Treason, Ann Coulter chronicles the anti-American actions of the leftist “liberals” in the United States from the Cold War to the beginning of the “War on Terrorism.” However, the book concentrates primarily on the Cold War, and fortunately so, as this is where Coulter shines.

Among other things, Coulter informs us about Soviet espionage and treachery in the Democratic administrations of Roosevelt and Truman, the injustice done to Joe McCarthy, and the Venona Project—a series of Soviet cables declassified in the 1990s.

The Venona Project was begun in 1943 by Colonel Carter Clarke, chief of the U.S. Army’s Special Branch, in response to rumors that Stalin was negotiating a separate peace with Hitler. Only a few years earlier, the world had been staggered by the Hitler-Stalin Pact. . . . Colonel Clarke did not share President Roosevelt’s trust in the man FDR called “Uncle Joe.” Cloaked in secrecy, Clarke set up a special Army unit to break the Soviet code. Neither President Roosevelt nor President Truman was told about the Venona Project. This was a matter of vital national security: The Democrats could not be trusted. (p. 36)

Coulter shows that both FDR and Truman repeatedly attempted to thwart investigations of Soviet espionage in their administrations, while ignoring any evidence that came through.

FDR “gave strict orders that the OSS [a precursor to the CIA] engage in no espionage against the country ruled by his pal, Uncle Joe” (p. 34). And an official in the Roosevelt White House reaffirmed this stance and told the army to stop its “code-breaking” activities, which luckily, “The head of the Venona Project ignored” (p. 46). Although FDR was repeatedly warned about Soviet spy Alger Hiss—a high-level official in the State Department—he repeatedly ignored the evidence and even told one official who warned him “to go f--- himself” (p. 18). At the end of the day, FDR took no action against Hiss. “To the contrary, Roosevelt promoted Hiss to the position of trusted aide who would go on to advise him at Yalta . . . where Roosevelt notoriously handed over Poland to Stalin” (pp. 18–27). . . .

View all articles by Joshua Lipana →
Letter to the Editor
Review: The 7 Principles of Zionism, by Dan IllouzReview: Mao’s Great Famine, by Frank Dikötter
Return to Top