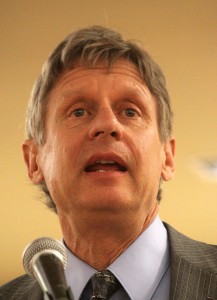 I readily concede that the GOP is a complete disaster. It is, after all, the party that in recent years has given us Bailout Bush, First-Amendment-Shredder John McCain, Mandate Mitt Romney, and Big-Government Theocrat Rick Santorum.

The central problem is that, unlike the major parties, the Libertarian Party (LP) is explicitly built on a core ideology, an ideology of subjectivism and hostility toward government, logically tending toward anarchism. (The Socialist Party too is based on an explicit ideology, that of collectivism and forced wealth transfers, and for that reason Johnson would never think of running with that party.) While I cannot demonstrate this fact in a short blog post, I have done so in a previous article and in thousands of other words I’ve written elsewhere on the topic.

Because some Libertarian goals are superficially similar to those required for a free society, promoting Libertarianism packages together some seemingly positive policy prescriptions (e.g., tax cuts) with philosophically corrupt fundamentals. Thus, promoting a Libertarian candidate blurs the lines between the objective moral basis for freedom and moral subjectivism, and between a rights-respecting government and no government at all.

When a Libertarian candidate pronounces his endorsement of “smaller government”—and the notion that the smaller the better—critics rightly point out that the logic of Libertarianism, and very often the explicit pronouncements of Libertarians, leads to anarchy. Recall that Libertarians twice ran an avowed anarchist for president; that in 2008 the LP selected Bob Barr only after casting multiple tied votes for Mary Ruwart, the anarchist who advocates (among other insanities) legalizing child pornography; and that the work of anarchist Murray Rothbard, widely known as “Mr. Libertarian,” has always been and continues to be a major influence on the party.

Although libertarians often claim to be inspired by the ideas of Ayn Rand, Rand denounced the movement precisely because of its amoralism and anarchism. There is simply no getting around the fact that these elements open the gates to all sorts of insanity. To take but one example from my own experience (when I was an LP activist), one Libertarian candidate for U.S. Senate in Colorado distributed emails promoting racism and violence; later he earned a felony conviction for threatening a judge.

Whereas the LP is based on an ideology of subjectivism and anarchism, the GOP is not. Initially the GOP was driven by anti-slavery activism, but once slavery was outlawed the GOP morphed into a coalition party, electing such ideologically diverse presidents as Teddy Roosevelt, Calvin Coolidge, Herbert Hoover, Ronald Reagan, and George W. Bush. The party is still without an ideology and in search of one. Thus, the promotion of a Republican candidate does not necessarily entail the promotion of a corrupt ideology in the way that the promotion of a Libertarian candidate does—and the possibility remains that advocates of liberty could, over time, establish a sound philosophical underpinning for the GOP. This possibility does not exist with the Libertarian Party.

If Gary Johnson had remained a Republican or run as an independent or with some coalition party, he might have been worth continued support. As it is, Johnson has thrown in his lot with the subjectivists, anarchists, advocates of legalizing child pornography, and clownish incompetents of the LP. America needs the real case for liberty, not the Libertarian perversion of liberty.