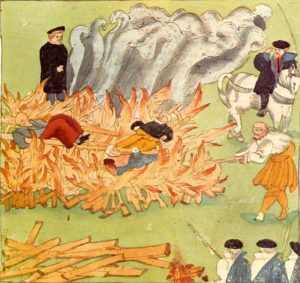 In central Nepal, a “40-year-old mother of two was burned alive . . .  after she was accused of being a witch.” The woman “was attacked and set on fire by family members and others after a shaman allegedly accused her of casting a spell to make one of her relatives sick.”

Meanwhile, Iran’s Supreme Court threatens a Canadian citizen with execution because the man “wrote a program to upload photos to the Internet.” That became a legal issue when a different party used the program “to upload pornography,” which, the court found, resulted in "insulting and desecrating Islam."

What enables such atrocities to happen in the 21st century, an era in which science and technology enable people to fly around the world, bounce television and communication signals off of satellites, and perform complex heart surgeries? How is it possible, in this day and age, that people still set family members on fire for being “witches”—and that governments still threaten to kill people over sex or nudity? What permits such utter terror, depravity, injustice, and barbarism?

The answer is mysticism, which Ayn Rand described as “the acceptance of allegations without evidence or proof, either apart from or against the evidence of one’s senses and one’s reason.” Those who seriously believe that a shaman reveals secret knowledge, or that an ancient book prescribes the will of a “deity,” willfully turn their eyes and their minds from reality to embrace the unproved and unprovable, the arbitrary, and, consequently, the horrific.

View all articles by Ari Armstrong →
Letter to the Editor
Obama Admin Seeking to Reestablish Funding for Evil UNESCOFrom the Editor, Spring 2012
Return to Top