"If You’re Looking for Brains, Just Stop at Israel" 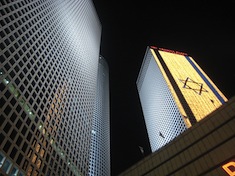 If productiveness in the face of difficult obstacles is a virtue, then Israel is indeed a virtuous country. Bloomberg reports that during the last decade, despite two wars (Lebanon in 2006 and Gaza in 2008) and on-going security problems, Israel’s stock exchange had the highest percentage return among twenty-four developed-nation exchanges, beating Hong Kong, which came in second, and Norway, which had the highest total return.

“Israel is an exciting place to invest,” Michael Steinhardt, the former hedge fund manager who produced returns averaging 24 percent a year over almost three decades until he retired in 1995, said in a telephone interview from Fisher Island, Florida. “The country is surrounded by enemies, it’s always on the edge of extinction, but it expands and prospers.”

The source of Israel’s success? The Israeli’s use of their minds. As Warren Buffet said, “If you go to the Middle East and you’re looking for oil, skip [Israel].... If you’re going looking for brains, just stop at Israel. You don’t have to go anyplace else.”