Human Rights Watch is Wrong on Islam and Politics 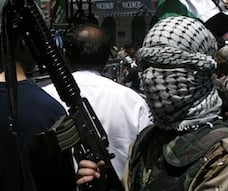 Human Rights Watch (HRW) is urging the West to respect the rise of political Islam in the Middle East, saying, "The international community must … come to terms with political Islam when it represents a majority preference." Instead of being unsympathetic to political Islam, says HRW, the West should encourage Islamist governments to “respect basic rights -- just as the Christian-labeled parties and governments of Europe are expected to do."

But contrary to what HRW implies, the “majority preference” of foreigners is not a standard by reference to which civilized nations should set foreign policy. Further, political Islam means violating rights and, ultimately, killing those who reject Islam. Whether Islamists gain power by force or by vote, they seek to force their barbaric creed on the citizenry and ultimately the world. Encouraging Islamists to “respect basic rights” is like encouraging communists to respect basic rights. It can’t happen.

Further, for Islamists to say that they intend to “respect basic rights” would be a patent lie. Iranian Reza Kahlili, in an interview with TOS, recounts what happened when Islamists took over Iran:

[T]he new government went back on its promise that the clerics would not interfere in government matters, that they would only address the spirituality of the people. The clerics started enforcing Islamic law, which was not supposed to be part of the new government. Soon Khomeini and other clerics declared that they were representatives of God on Earth and that anybody who opposed them would be regarded as a “moraheb,” an enemy of God, and executed.

Following that, tens of thousands of men and women were arrested, opposition political parties were banned, and certain universities were shut down to get rid of the Western influence in our education. Among the thousands taken to Evin prison, where they kept political prisoners, were my best friend and his siblings.

I witnessed the torture and the horror that this new regime was inflicting on Iranian citizens. Teenage girls were raped prior to execution—because of the Muslim belief that virgins go to heaven. Boys and girls were tortured in unimaginable ways, some of which I’ve described in my book [A Time to Betray], and then executed.

Political Islam should not be tolerated; it should be eliminated.

View all articles by Joshua Lipana →
Letter to the Editor
What’s So Super About the Super Bowl?The Key to Eating and Acting Without Regret
Return to Top