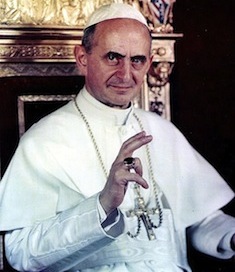 Catholics angry at President Obama over the insurance mandate to cover birth control should blame one organization above all others: the Catholic Church. In 1993, the United States Conference of Catholic Bishops, declaring health care “a basic human right,” released a statement calling for government-imposed universal health care, based upon the “biblical … priorities of social justice, and the principle of the common good.”

The Bishops’ declaration is rooted in the Catholic Church’s broader philosophy. For decades, the Church has explicitly endorsed global welfare statism. This policy was definitively laid down by Pope Paul VI in his 1967 Encyclical Populorum Progressio. In the world of Paul’s vision, the primary purpose of governments would be to carry out the principle that "created goods should flow fairly to all". To ensure that “right,” the “public authorities” would be endowed with powers “to establish and lay down the desired goals, the plans to be followed, and the methods to be used.” Paul was brutally clear: "All other rights, whatever they may be, including the rights of property and free trade, are to be subordinated to this principle." Pope Benedict XVI, in his 2009 Encyclical Caritas in Veritate, reaffirmed the message of Populorum Progressio, calling it “still timely in our day.”

Consistent with the Church’s own stated ideals, in what Examiner reporter Steven Hoffman called “a modern day Faustian Bargain,” Church leaders enthusiastically supported Obama and subsequently ObamaCare. “Now,” as Hoffman observes, “the time [has come] to give the devil his due.”

The Church’s rebellion against the mandate properly rejects the government’s “right” to force people to act against their religious consciences. But the issue is wider than religion. As Ari Armstrong stressed in a recent post: “Insurance mandates not only violate Catholics’ freedom of religion; they violate everyone’s freedom of conscience and everyone’s freedom to use their own resources as they judge best.”

In its zeal for "social justice" (i.e., forced wealth redistribution), the Church disregarded the rights of others, and now finds itself assaulted by its own immorality. When you make a deal with the statist devil, the bell eventually tolls for you.

View all articles by Michael A. LaFerrara →
Letter to the Editor
‘Keep Your Eyelids Up,’ Dr. Seuss ImploresEveryone Pays When Birth Control is “Free”
Return to Top