Review: Eames: The Architect and the Painter 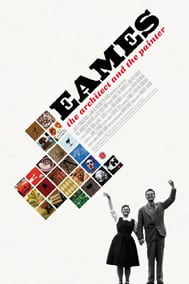 Eames: The Architect and the Painter, of the PBS American Masters series, presents a portrait of the husband and wife design team of Charles and Ray Eames. Charles, educated as an architect, and Ray, trained as a painter, met in 1940 at the Cranbrook Academy of Art in Bloomfield Hills, Michigan. Although Charles was already married at the time, he fell madly in love with Ray, ended his marriage, and proposed to her. After marrying, they left the Midwest and moved to Los Angeles with the goal of bringing to fruition Charles’s vision for the molded plywood chair, which had already won a major award but needed further development. There they founded the Eames Office, which was by all accounts informal, playful, and circus-like, yet simultaneously focused and intense. “[L]ife was fun was work was fun was life” as former Eames Office designer Deborah Sussman describes it in the film.

The Eames Office became a launching pad that propelled design after successful, groundbreaking design onto the postwar American scene. Most commonly recognized today for its Herman Miller-produced plywood- and fiberglass-shell chairs, the Eames Office produced a wide range of furniture designs over the years, as well as an array of other products, including molded plywood military splints, toys, textiles, photography, graphic design, educational films, and elaborate exhibition designs. Told through film clips, stills, letters, interviews, and narration, this engaging documentary film manages to take their incredibly prolific working life of nearly forty years and compress it into eighty-four fascinating minutes.

Rather than proceeding in strictly chronological order, the film examines the Eames’ life and work by general subject matter: their chair designs and early life together; the design and construction of their home, Case Study House #8 (from the magazine Arts and Architecture’s “Case Study Houses” program); the first experimental and, later, educational films they made; Charles and Ray’s strained relationship in their later years, including Charles’s affair with art historian and filmmaker Judith Wechsler (which their collaborative work-life survived); their last projects together; and Ray’s final ten years (exactly, to the day) after Charles’s death in 1978. . . .

View all articles by Earl Parson →
Interview with Ellen Kenner and Ed Locke on The Selfish Path to RomanceReview: The 7 Principles of Zionism, by Dan Illouz
Return to Top