A Note from Peter Huessy on Egypt 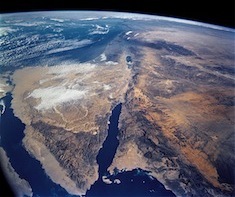 I received the following note from Peter Huessy responding to my interview with Cynthia Farahat, in which Mr. Huessy's views on Mubarak was mentioned (click here to read the interview). I’m posting it here with Mr. Huessy’s permission.

I am glad to read about Cynthia Farahat and her extraordinary courage. I agree with her views on Mubarak and his giving the Muslim Brotherhood room to organize while at the same time pretending to ban them. Her point is well taken; especially how the more pro-liberty elements in Egypt were persecuted and imprisoned.

However, I believe she must see the difference between the previous government in Egypt and, say, Syria and Iran today, and the dangers of Egypt joining such a coalition. Was Mubarak arming Hamas and Hezbollah? And supporting terrorist attacks against the United States and its allies, including Israel? The U.S. government's withdrawal of support for Mubarak, and now the rise of the Muslim Brotherhood—seemingly with support from the Obama administration—could end up with a very repressive, shariah-compliant, terror-sponsoring state.

For example, the Sinai was relatively quiet for decades. The role of the previous Egyptian government in keeping in check a potential threat to Israel from this area must be kept in mind. Also important are efforts such as the "flotilla" that attempted to undo the blockade of Gaza. Egypt maintained the blockade, along with Israel, while Islamists, Turkey and radical left elements in the United States tried to over-turn the blockade with the aim of making it easier to get weapons into Gaza. It is apparent also that the Sinai has now become what one observer called an "arms bazaar" for terror groups such as Hamas to "stock-up."

I agree that the failure of the United States to support genuine Egyptians who want freedom, and a more Western style of government was a black mark against our country. Can such an alternative now be pursued? The day may be late in Egypt. But I will support Ms. Farahat and her efforts to do so unequivocally.

View all articles by Joshua Lipana →
The Problem of Gary Johnson’s Libertarian AffiliationSasha DiGiulian: The Sight of an Achievement
Return to Top