To Give Americans a “Fair Shot,” Obama Should Stop Violating Our Rights 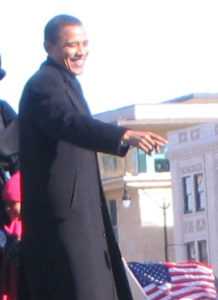 In his State of the Union address, President Obama said, “We can restore an economy where everyone gets a fair shot, everyone does their fair share, and everyone plays by the same set of rules.” If only he had the slightest clue what constitutes fairness and equality under the law.

Obama proposes policies with opposite goals and outcomes.

Rather than protect the equal rights of all business operators, Obama calls for corporate welfare for politically-favored businesses (such as Solyndra).

Rather than respect the rights of parents to fund the educational opportunities that best meet the needs of their children, Obama wants more federal controls of education.

Rather than lower tax rates across the board, Obama calls for discriminatory taxes that favor the politically connected.

Rather than protect the rights of individuals and companies to buy goods from their suppliers of choice, Obama wants to establish a “Trade Enforcement Unit” to restrict free trade.

Rather than protect the rights of consumers to purchase the energy that best suits their needs, Obama wants to play favorites with federal mandates.

Rather than seriously restrain federal spending, Obama is content to continue many of the policies that have contributed mightily to the nation’s $15 trillion debt.

There is nothing fair about Obama’s blatant violations of individual rights.

True, Obama offered a few words about protecting property rights, preventing fraud, and slightly loosening the federal shackles on domestic energy production. But such comments seem calculated to blur the difference between rights-protecting behavior and rights-violating behavior by the government, and Obama’s policies clearly favor the latter.

Moreover, Obama blamed the free market for the failures of the government, as with the mortgage meltdown caused by the federal government’s easy-money policies, even as he credited politicians and bureaucrats for the astounding achievements of industrialists, as with hydraulic fracturing in the production of oil and gas (see, for instance, the story of producer George Mitchell).