Santorum Stands for Big Government because He Stands for Collectivism 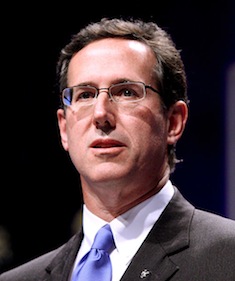 Might Republicans select as their presidential candidate someone who wants even more government controls over our lives than Mitt Romney, father of Massachusetts’s health-policy fiasco Romneycare? Their sudden embrace of Rick Santorum, who won a close second in the Iowa caucuses, threatens just that outcome.

Santorum’s commitment to government controls is well-documented. Conservative Erick Erickson of Red State points out that, while in Congress, Santorum supported steel tariffs, more federal control of education, the welfare-ballooning prescription drug benefit, the ludicrous Bridge to Nowhere boondoggle, milk subsidies, and job-killing wage controls. As David Boaz summarizes, Santorum “wanted to be known as a porker, an earmarker, and Senator Pothole.” The Huffington Post reports that Santorum thinks states have the right to ban birth control. In a 2005 article, Jonathan Rauch quotes Santorum: “Some will reject what I have to say as a kind of 'Big Government' conservatism.” Let us hope so.

Santorum explained his motivating principles in a video interview released in 2006. He said, “I don’t agree that people should be empowered to do what pleases them the most. We have a responsibility beyond [ourselves].” Santorum characterized the “liberal view” as “anti-responsibility,” saying it holds, “I should be able to do whatever I want to do as long as no one gets hurt.” He continued:

Santorum complained that we have “an entire culture that focuses on immediate gratification and the pursuit of happiness and personal pleasure, and it is harming America.”

While Santorum claims to invoke the Founders, his views are diametrically opposed to theirs. The right to the pursuit of happiness is one of the “unalienable rights” the Founders sought to protect in creating America. That’s why it’s specified in the Declaration of Independence.

But Santorum does not advocate the pursuit of happiness. He wants to jettison this founding principle of America in favor of collectivism.

If the phrase “sexual freedom and personal issues” in Santorum’s statement were changed to “economic freedom and business issues,” Barack Obama could have made the same case in one of his speeches and everyone would have seen it as collectivism. Americans need to learn that all calls for sacrificing the individual to “others” or “the common good” or “your neighbors” or “your country” are variants of the same evil. Obama and Santorum differ only on the kind of collectivism each hopes to impose on America.

View all articles by Ari Armstrong →
Interview with Clare M. Lopez on Islam and the Enemies of AmericaJohn David Lewis: A Man Who Lived
Return to Top