Obama Should Help End All Energy Subsidies, Not Play Favorites 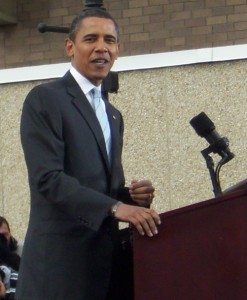 President Obama is schizophrenic in his energy proposals.

In a Thursday address at Buckley Air Force Base, Obama said he wants “the same set of rules for everyone.” Yet, on one hand, he said he wants to end subsidies and “taxpayer giveaways” to oil companies, while on the other hand he wants to establish “clean energy tax credits” and mandates that compel people to use politically favored energy sources.

In other words, Obama wants one set of rules for productive oil companies and a different set of rules for his political cronies who run parasitical “alternative” energy companies like Solyndra. Instead, Obama should call for the elimination of tax-funded subsidies and the even-handed lowering of taxes across the board.

A business subsidy—corporate welfare—is an abomination. As Mike Brownfield argued for the conservative Heritage Foundation last year, “The left’s anti-subsidy rhetoric is right on. Ending all energy subsidies, including those for oil and gas, would be good for American taxpayers and consumers.” More importantly, it would protect their rights to control their own wealth. Why, then, do some people condemn corporate welfare for oil companies even as they champion it for their own pet projects? Brownfield notes that, for such activists, “vilifying an industry [oil] is their end game.”

The problem of discriminatory taxes is trickier. However, clearly the wrong approach is to confuse subsidies with tax breaks. A subsidy involves forcibly confiscating the wealth of some parties and giving it to other parties. A tax break involves letting a business keep more of the wealth that it produces and properly owns. The two things are fundamentally different.

That said, the federal government ought not play favorites by punishing some businesses with higher tax rates. Discriminatory taxes violate the basic principle of equality under the law.

The solution to discriminatory taxes is not to impose even higher taxes on the historically favored businesses. To do so would be to act on the flawed principle that two wrongs somehow make a right. Instead, the proper approach is to start by dropping everyone’s taxes to the lower rate. Obama should not try to raise net taxes on oil companies; he should reduce net taxes on everyone paying more.

But Obama refuses to demand “the same set of rules for everyone.” Instead, he wants to pick the winners and losers in the economy—the rights and well-being of energy companies and their customers be damned.

If you enjoyed this post, please consider subscribing to The Objective Standard and making objective journalism a regular part of your life.