Even with Gary Johnson, the Libertarian Party Undermines Liberty 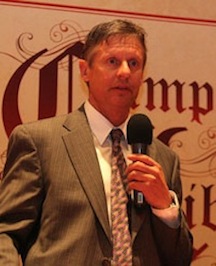 To many lovers of liberty, Gary Johnson seemed like the ideal Republican candidate for president, an advocate of staunch fiscal responsibility along with personal liberty on issues such as abortion and gay marriage. He appeals to many who share the sentiments of a Colorado business owner: “I want the Democrats out of my pocket and Republicans out of my bedroom” (a quote invoked by Paul Hsieh in an article on abortion rights).

Consider, for instance, the web page about abortion at Libertarianism.com (a web site run by Advocates for Self-Government, a group distinct from the LP but embraced by many in the Party), which claims: “Abortion is a difficult issue upon which reasonable, ethical people can disagree.  Until society can come to consensus about the status of the fetus, libertarians can reasonably be divided on their policy prescriptions.” But there is nothing reasonable about the notion that whether a fetus has rights is to be determined by social consensus. As Diana Hsieh and I argue in a recent article for The Objective Standard, the question of abortion rights cannot be decided by social consensus; rather, it must be decided by an objective assessment of the nature of rights and of the fetus. (Such an assessment shows conclusively that women have the right to seek an abortion and doctors have the right to perform abortions; see the article for details.)

Although some libertarians say that all abortions should be legal, others say they should be legal only until “the cerebral cortex has emerged,” and still others, such as 1988 LP Presidential candidate Ron Paul, say that all “abortion is an act of aggression that is incompatible with libertarianism.” Such contradictory viewpoints coexist within libertarianism because one of its central ideas is that there are no demonstrably true, objective moral standards on which to base political conclusions.

Because libertarians generally deny the possibility of objective standards in morality, they offer no coherent theory of rights or of what constitutes freedom or force; thus, they disagree about all sorts of important issues in addition to abortion. For example, some support intellectual property rights, while others regard any effort to impose copyrights or patents as an “initiation of force” (see the Wikipedia entry devoted to this debate.)

Likewise, some libertarians argue that children should be “free” to have sex with adults. Although the LP platform says, “Consenting adults should be free to choose their own sexual practices and personal relationships,” Mary Ruwart, an author featured prominently by Advocates for Self-Government and a leading contender for the 2008 LP presidential ticket, claims that restriction is too narrow. Regarding the question of child pornography, she writes in her book on libertarianism: “Children who willingly participate in sexual acts have the right to make that decision.” Such a view obliterates the very meaning of rights and sanctions the ugliest of crimes. Granted, many libertarians rightly recoil at such positions, but that does not change the fact that Johnson has placed himself in the same philosophic cesspool as the likes of Ruwart.

Libertarians do tend to agree on foreign policy, on which subject their views are generally abhorrent. The libertarian aversion to government as such helps explain why libertarians such as Ron Paul routinely denounce U.S. efforts toward self-defense and blame America for Islamist terrorism. Granted, various U.S. foreign policy moves have failed to defend America and in fact have empowered Islamist states that sponsor terrorism. But this does not change the fact that Islamists are ideologically driven to establish a global Islamic theocracy and that Islamist terrorism stems fundamentally from that goal. Yet libertarians routinely bury their heads in the sand in the face of such threats, choosing instead to blame our government.

Further, many libertarians in and out of the LP openly endorse anarchy. For example (and not surprisingly), Ruwart writes that, while studying libertarianism, she “was easily won over to anarchy.” Murray Rothbard, active in the LP during the 1970s and 1980s and known to many as “Mr. Libertarian,” also explicitly advocated anarchy, professing his “deep and pervasive hatred” of government.

Libertarians who do not openly endorse anarchy nevertheless tend to see government as inherently evil. Harry Browne, the LP’s presidential candidate in 1996 and 2000, expresses a typical libertarian perspective: “It seems to me that a lot of time is wasted by libertarians who argue whether it's possible to have a society without any government at all. Those who want no government at all can continue working to reduce the size of government. Those who want limited government can fight to keep the federal government” small. In other words, the ideal is anarchy, but if we cannot achieve that ideal, the closer we get to it the better. Before running for office Browne was less ambivalent; in his 1973 book he wrote, “I believe a world without ‘government’ would be a better place to live.”

True, the LP platform states, “Government exists to protect the rights of every individual including life, liberty and property.” Yet for the LP such statements constitute baseless platitudes. The platform also states that “where governments exist, they must not violate the rights of any individual” (emphasis added). Given that Libertarians have repeatedly promoted avowed anarchists as high-level candidates and party leaders, it should come as no surprise that the party’s platform leaves open the possibility that government ought not exist. The Founders, by contrast, saw constitutional government dedicated to the protection of individual rights as essential to liberty.

Obviously many Libertarian Party members, including Johnson, reject anarchism and the kookier elements of the party. Yet, by running as a Libertarian, Johnson necessarily drags his better ideas into the libertarian muck. By lending his credibility to a party that often tolerates (or even glorifies) anarchism, blames America for Islamist assaults against us, and embraces moral subjectivism and outright craziness, Johnson sullies the case for liberty by muddying it with antithetical ideas.

Note: The author used to be a Libertarian Party activist who campaigned for Harry Browne.

View all articles by Ari Armstrong →
Who Deserves Credit for Tebow’s 316 Yards?Interview with Peter Huessy on U.S. Foreign Policy, Iran, and the Middle East
Return to Top