Did God Help the Patriots Beat the Broncos? 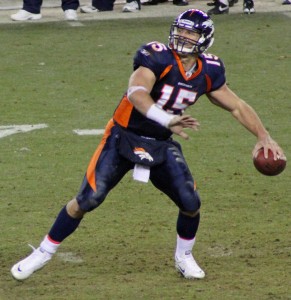 Christians offering prayers for a victory for Tim Tebow and the Broncos had exactly the same effect as witches holding a seance for Tom Brady and the Patriots: none. Football games are won or lost based on the skill and intensity of the players and the quality of the coaching. As I wrote previously, crediting a supernatural being for a team’s success is an injustice to the members of that team who put so much into a game.

Yet, oddly, some continue to suggest that God may influence the outcome of football games. For example, a letter to the Denver Post, referring specifically to the outcome of sporting matches, suggests, “God and Tim Tebow are working together in wonderful and mysterious ways.” (The letter was written without any apparent hint of sarcasm; whatever the author's intention, some people embrace its sentiment.)

The most glaring problem with such claims is that there is no evidence that a “God” exists, much less that such a being plays a direct role in human affairs.

A secondary problem with claims of supernatural intervention is that they are senseless even on their own terms. A God who would get involved in sporting matches would be even more petty than those fans who pray for such divine intervention. Further, as another letter to the Denver Post asks, why would God choose “to intervene in trivial sports contests and not [prevent] famine and genocide in Africa, or the murder of protesters in Syria, etc.?” This raises the issue formally known as the “problem of evil”: Why would a God with unlimited power to stop human suffering decline to do so?

Those who claim divine intervention in sports and daily life ignore the actual and obvious causes of human events: the willed actions of people and the nature of the things on which they act. A football crosses a goal line because men run it, kick it, or throw it over the line, not because God wills it to cross the line.

Neither God, nor the stars, nor some magical incantation helped the Patriots destroy the Broncos. They did it on their own.