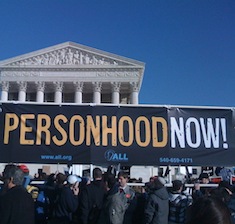 As a matter of political strategy, scaring the hell out of independent women voters by threatening to ban the birth control pill and all abortions even in cases of rape and incest is an easy way to lose a high-level election, at least outside the south. Just ask Ken Buck, a Republican who narrowly lost a U.S. Senate seat in Colorado last year largely by strapping himself to the anti-abortion political anchor. Through the primaries, many thought the seat to be unwinnable by the Democrat.

And yet Newt Gingrich makes Buck look like the voice of restraint on the issue. In a year when Barack Obama gift-wrapped economic issues for the Republican campaign, a Gingrich-led GOP would place abortion in the forefront of many voters’ minds.

Gingrich wants to enact laws allowing “no abortions for any reason.” And he means it. After irritating anti-abortion leaders with a seemingly minor concession during an interview with ABC News, Gingrich quickly backpedaled, reaffirming his strict commitment to nationwide abortion bans with no exceptions.

Originally Gingrich said in response to a question regarding abortion, “I think that if you take a position when a woman has [a] fertilized egg and that’s been successfully implanted that now you’re dealing with life.” To quickly review the biology, after a male’s sperm fertilizes a woman’s egg, the resulting zygote moves into the uterus over a period of days. Implantation in the uterus traditionally marks the beginning of pregnancy. So Gingrich’s message is that he wants total abortion bans from the moment of fertilization.

To the anti-abortion movement, the span of days between fertilization and implantation matters very much. To the conservative site Red State, Gingrich’s statement during the interview “demonstrates a deficiency in Gingrich’s dedication to a pro-life [sic] agenda.”

In reply to such criticism, Gingrich confirmed, “I believe that human life begins at conception” as opposed to implantation, so conception is the moment at which he wishes to ban any act that could harm or kill a zygote.

To leave absolutely no confusion on the matter, Gingrich pledged support for the goals of Personhood USA, an anti-abortion group that explicitly wants to ban all abortion in the United States from the moment of fertilization, without even exceptions for rape or incest.

The total abortion ban that Gingrich advocates would severely harm women as well as their supporters, as Diana Hsieh and I discuss in a recent article for this journal.

If, as Personhood USA asserts, a zygote is a person with the same right to life as a born infant or adult, then any action that intentionally kills a zygote, embryo, or fetus constitutes murder, as a representative of the organization emphasized during a November news conference. By the logic of the position and in accordance with existing murder statutes, abortion would be legally prosecuted as murder. Any doctor or husband who assisted in an abortion would be prosecuted as an accessory to murder. A Canadian anti-abortion group forthrightly argues that women who get abortions should face severe prison sentences. A Colorado supporter of Personhood USA explicitly calls for the death penalty for women who get abortions.

Gingrich holds that a microscopic clump of largely undifferentiated cells inside a woman’s body deserves the same legal protections as a born infant living independently outside its mother’s body. His dogmatic position utterly defies the facts of pregnancy and the status of the zygote or fetus, as well as the basis and meaning of individual rights. Individuals need rights to live successfully with others; the concept cannot apply to a zygote or fetus wholly contained within another’s body. A woman is an independent person with the right to live her own life in accordance with her own judgment. A zygote or fetus is not. Abortion bans severely harm women and their partners by violating their rights.

Gingrich’s support of total abortion bans reveals him as an enemy of liberty and individual rights. His call to ban all abortion is profoundly anti-life.

View all articles by Ari Armstrong →
Did the U.S. government secretly plan for a drone to crash in Iran?The Perfect Last-Minute Gift: Stuff The Standard
Return to Top