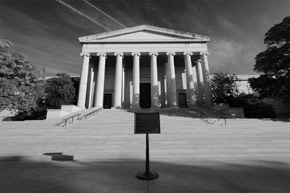 Sanctum Sanctorum: The National Gallery of Art in Washington, D.C.

Author’s note: An extensive gallery of original photography of the National Gallery of Art and its superb collection can be found here. 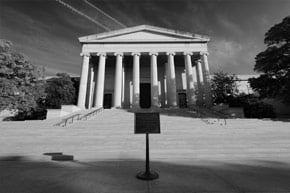 If, like me, you hold that art is a necessity of ardent living, then experiencing art is one of the most crucial aspects of your life. And just as food is not meant only to be looked at in magazines but eaten—so too paintings and sculptures are not meant merely to be looked at in books, but devoured in person. This requires visiting museums, where most great art is housed.

My favorite museum, after years of travel and thousands of hours spent in museums, is the West Building of the National Gallery of Art (NGA) in Washington, D.C. Although there are larger museums with bigger collections—most notably the Metropolitan Museum of Art in New York City—the NGA has a first-rate collection, a top-notch preservation policy, and a spectacular architectural setting.

In America, museums on the East Coast have the strongest collections. Those such as the NGA, Met, and Museum of Fine Arts (MFA), Boston—recipients of the generosity of America’s 19th- and early-20th-century collector-industrialists—contain the largest, most-diverse group of masters and masterpieces. Museum collections in the western and southern parts of the country tend to consist more of second-tier artists and artworks. The J. Paul Getty Museum in Los Angeles, for instance, is a well-endowed museum with a large but relatively weak collection. It has no original Vermeers, merely a copy of one. Likewise, its A Young Girl Defending Herself Against Eros is not the original by 19th-century master William Bouguereau, but rather a much smaller reproduction done mostly by his assistants. Although the Getty does have a Raphael, it is a minor, early portrait, rather than one of his celebrated Madonnas. The museum’s Canaletto is not one of his giant panoramas of Venice, but a minor painting of the Arch of Constantine. By contrast, the NGA has four Vermeers, five Raphaels, and nine paintings by Sir Peter Paul Rubens; no West-Coast museum comes close to having masterworks on this scale. 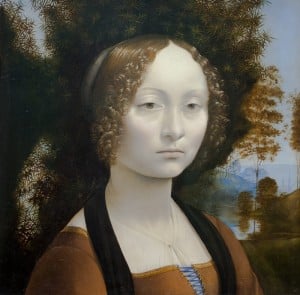 Leonardo da Vinci, Ginevra de’ Benci, ca. 1474/1478. Housed at the NGA, this is the only painting by da Vinci in the United States. Although only in his early twenties when he painted Ginevra de’ Benci, Leonardo was at his innovative best in this painting, placing the sitter in an outdoor setting, positioning the body in a three-quarter pose, and using a new medium—oil painting. Photo credit: Lee Sandstead.

Created by an act of Congress in 1937, the NGA was formed largely from the donated collections of Andrew Mellon and Samuel Kress, and it features a robust collection of Renaissance, Baroque, rococo, neoclassical, Romantic, and American art. It houses the only painting by Leonardo da Vinci in the United States and important works of several masters, including Rembrandt, Boucher, Fragonard, David, and Bierstadt. . . .

Lee Sandstead is an art historian who travels the world looking for, experiencing, and documenting great art.