American Individualism—How a New Generation of Conservatives Can Save the Republican Party, by Margaret Hoover. New York: Crown Forum, an imprint of the Crown Publishing Group, a division of Random House, Inc. 247 pp. $24.99 (hardcover). 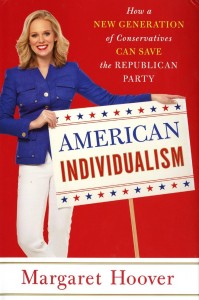 While working on the 2004 Bush-Cheney reelection campaign team, Fox News contributor Margaret Hoover came to a stark realization: On gay rights, reproductive freedom, immigration, and environmentalism, the Republican party “was falling seriously out of step with a rising generation of Americans . . . the ‘millennials’” (pp. ix, x). “[B]orn roughly between the years 1980 and 1999 [and] 50 million strong,” this rising new voter block, says Hoover, has “yet to solidly commit to a political party” and thus could hold the key to the GOP’s electoral future (p. xi).

Hoover looks back for comparison to 1980, when Ronald Reagan fused a coalition of diverse conservative “tribes” around a central theme: anticommunism (p. 25). If the millennials, who “demonstrate decidedly conservative tendencies” (p. xii), could be united with today’s conservatives under “a new kind of fusionism” (p. 41), the Republican party would be on its way to majority status, she holds.

According to Hoover, these three factions have formed the core of the movement that began with the publication of the National Review in November 1955 (p. 28) and have since been joined by neocons (p. 35), Rush Limbaugh’s “Dittoheads,” Sarah Palin’s “Mama Grizzlies,” the Tea Party uprising (pp. 36–37), and the “Crunchy Cons” and “enviro-cons” (p. 37). Hoover’s hope is to find common ground between these conservatives and the millennials.

In the introduction and in chapter 3, Hoover identifies millennials broadly as “likely to call themselves liberal,” yet “not proponents of the big-government orthodoxy of modern liberalism.” She says they “cherish individual freedom,” “have favorable attitudes toward business and individual entrepreneurship,” and lean toward being “fiscally conservative but socially liberal” (pp. xi–xii)—but still “have significant faith in the power and ability of government to do good” (p. 56). Although the millennials voted heavily for Obama in 2008, they retreated from the Democrats in 2010 and, says Hoover, are “ripe for a political party to come along and make the case for maximum freedom, fiscal responsibility, equality of opportunity, social mobility, individual responsibility, and service to the community and country” (p. xii). . . .

View all articles by Michael A. LaFerrara →
Letter to the Editor
Review: This is Herman Cain!Review: Disabling America, by Greg Perry

1 American Individualism, ch. 1: “American Individualism,” http://www.hooverassociation.org/hoover/americanindv/american_individualism_chapter.php. I found no evidence to indicate that Ms. Hoover disagrees with any part of Herbert’s political philosophy. Her speech to the Herbert Hoover Presidential Library Association, in which she glowingly endorses her great-grandfather’s philosophy, can be found at http://www.hooverassociation.org/hoover/americanindv/american_individualism_by_margaret_hoover.php.