Already battered by slowing automobile sales due to the 2008 recession, Toyota faced a second crisis: claims that its management had put short-term profits ahead of their customers’ safety. With commentators in the United States harshly criticizing the Japanese car manufacturer, Jeffrey K. Liker felt compelled to rise to Toyota’s defense. 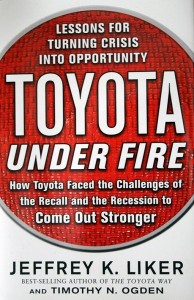 Liker is the author of six books on the company, including the international best seller The Toyota Way, which shows readers the principles and operations that enabled Toyota to become both highly regarded by its customers and one of the most consistently profitable companies ever. In short, Liker knows Toyota more intimately than most, and the claims he was hearing in 2009 didn’t correspond to that knowledge.

But before he rushed to defend the company, Liker paused. A friend reminded him that blindly defending the company wasn’t “the Toyota way,” and he had to agree.

The Toyota Way demands that any problem be thoroughly investigated before any conclusions are reached. It demands that problem solvers “go and see” the problem firsthand and not rely on abstract, thirdhand reports. It demands thoughtful and critical reflection to find root causes and develop effective solutions. Most of all, it demands that every team member openly bring problems to the surface and work to continuously improve what is within their control. I wasn’t doing any of these things. Whether Toyota was living up to its principles or not, I wasn’t. (loc 165)

So Liker set aside his defense of Toyota and set out to investigate what happened at Toyota during these crises; Toyota Under Fire: Lessons for Turning Crisis into Opportunity presents his findings. Together, Liker and coauthor Timothy N. Ogden went to plants across America and Japan to see whether Toyota was still the same company that Liker profiled in his earlier books—a company living up to its principles. As it turned out, Liker was glad he paused.

Toyota had changed. For one, it was a much larger company than the Toyota Liker first wrote a book about in 2003. There was another difference, a big one. After automobile sales collapsed in 2008, Toyota reported a $4 billion loss, its first since 1950. And nobody at Toyota was resigned to its being anyone’s fault but their own. . . .