Review: This is Herman Cain! 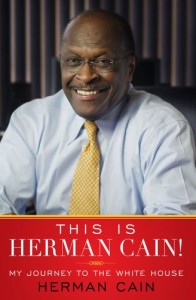 In This is Herman Cain, Herman Cain attempts to convince the reader to support him in his run for president of the United States by telling the story of his life, with emphasis on his amazing business accomplishments. Although the impressive story is somewhat undercut by Cain’s mixed politics and religious (even superstitious) beliefs, this self-confident, ambitious, and capable business leader appears to be an admirable man.

Cain recounts his early childhood, growing up in segregated Atlanta “po’, which is even worse than being poor” (p. 1). His father “worked three jobs: as a barber, as a janitor at the Pillsbury Company, and as a chauffeur at the Coca-Cola Company”; and his mother worked as a maid (p. 15). Nevertheless, thanks to his father’s influence, Cain had a positive attitude:

My attitude then—as it is to this very day—was that you take a seemingly impossible goal and you make it happen. That was one of the many lessons I learned from Dad: He never allowed his lack of formal education to be a barrier to his success. And he never allowed his starting point in life or the racial conditions of his time to be excuses for failing to pursue his dreams. Dad taught me the value of having dreams, the motivation to pursue them, and the determination to achieve them. (p. 14)

According to Cain, he was ambitious from a young age, pursuing a series of ever more-challenging goals. He studied mathematics in college, then went to work in the U.S. Navy as a mathematician. When he learned that he was being passed over for promotions because he had only a bachelor’s degree, he studied computer science at Purdue University and earned his master’s degree in “one intense, demanding year” (p. 42). He did get promoted, and, at twenty-seven, achieved his first goal—a job that earned more than $20,000 a year (p. 44).

Cain’s next goal was “to be vice president of something, for somebody, somewhere, someday.” With the help of his dad, he landed an interview with Coca-Cola; its management was so impressed that they hired Cain even though no jobs were available, creating for him the position “manager of management science” (p. 44).

At age thirty-two, Cain joined Pillsbury Company and advanced quickly, moving “from manager to director; from director to group director; . . . from group director to senior director of Management Information Systems for the Consumer Products Division”—and ultimately to corporate vice president of systems (pp. 46–47). Cain successfully handled the tough assignments he faced, as the following example indicates: . . .