Disabling America: The Unintended Consequences of the Government's Protection of the Handicapped, by Greg Perry. Nashville: WND Books, 2004. 240 pp. $17.99 (hardcover). 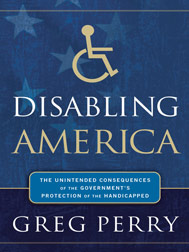 For the purpose of “helping” the disabled, President George H. W. Bush signed the Americans with Disabilities Act into law in 1990. In Disabling America, Greg Perry tells us that the “ADA infiltrates the lives of average Americans in ways far beyond what we usually think—wheelchair signs in parking lots and grab bars in public restrooms” (p. 2). And as the book shows, the ADA affects virtually everything in the private sector.

Perry, a successful writer and businessman who was born with one leg and only three fingers, explains in chapter 1, “Compassion or Coercion,” why he believes the ADA is immoral. He compares a situation in which a person voluntarily helps an elderly lady cross a street with a situation in which the government forces you to help the lady to cross the street.

Perry moves on to show the damage that government intervention in the name of the disabled has done to businesses, including forcing some to close down. He reports on how business owners have had to spend hundreds of thousands—in some cases millions—of dollars fighting baseless lawsuits and complying with ADA standards, and how their overall freedom has been diminished.

One example is Carlo Morelli, who owned and managed Raviolli’s, a pasta parlor in Dallas. Many people in Morelli’s community enjoyed Raviolli’s, and eventually it grew to become a catering operation that employed eighty-five people. Unfortunately, a dishwasher, Jeremy, contracted AIDS. Because his immune system had been severely compromised, he got sick often and put people around him at risk. Morelli offered Jeremy a raise to do gardening work and run errands instead of kitchen work so as to lessen the health risk. “Jeremy left and returned with an Equal Employment Opportunity Commission representative who told Morelli that Jeremy would stay in the kitchen” (pp. 24–25). Morelli’s other employees, due to a rational fear of getting sick, began quitting. The restaurant’s reputation swiftly deteriorated, and its profits plummeted. . . .

View all articles by Joshua Lipana →
Letter to the Editor
Review: American Individualism, by Margaret HooverReview: The Right to Earn a Living, by Timothy Sandefur
Return to Top