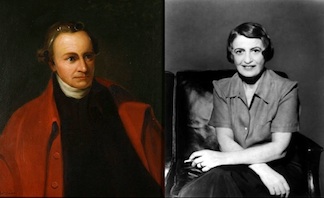 From tea partyers to conservatives to “liberals” to flea partyers—everyone has an opinion about what people and governments have a right to.

But are anyone’s opinions on such matters more than mere opinions? Can anyone name the source and nature of rights and prove that his views are true?

Although everyone has an opinion about rights, almost no one can prove that his opinion is correct. For advocates of liberty, this is a big problem. If we can’t identify the objective source and nature of rights, we can’t defend freedom; we can’t reverse the statist trend that is destroying our world; we will lose our liberty.

Fortunately, Ayn Rand discovered the objective source and nature of rights, and anyone who wants to understand these vital truths can—in the course of about half an hour.

In my article "Ayn Rand’s Theory of Rights: The Moral Foundation of a Free Society," I examine the traditional theories of rights—God-given, government-granted, and “natural” rights—and show why none of these theories holds water. I then present Rand’s theory, showing step by step how it is derived from perceptual reality, why it is demonstrably true, and how it grounds the propriety of freedom in observable fact.

From Sarbanes-Oxley to Obamacare to Dodd-Frank to TSA molestations to countless coercive “stimulus” plans, we are losing our liberty. What will our political situation be in five, ten, fifteen years? Will we be free, semi-free, mostly controlled, or essentially enslaved?

It depends on what we are willing to do today.

Are we willing to consider radical ideas and evidence in support of them—even if they challenge the status quo? Are we willing to share with others the truths we discover—even if doing so makes us look radical? Or are we afraid of evidence that might contradict traditional views, afraid that knowing too much unpopular truth might entail too much mental and social fatigue.

“For my part,” said Patrick Henry, “whatever anguish of spirit it may cost, I am willing to know the whole truth.” When enough people approach Rand’s ideas with Henry’s courage, liberty will live again.

View all articles by Craig Biddle →
Letter to the Editor
Send a Student to the NYOS ConferenceTOS Blog Comments are Active!
Return to Top