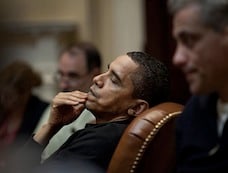 “Banks got bailed out, we got sold out,” cried Wall Street Occupiers. The sentiment is true, but it explains nothing. Remember that the federal government also bailed out the auto unions and, more recently, more underwater homeowners. On Wednesday President Obama spoke to students in Denver, promising a new round of bailouts, this time for recipients of student loans. But saddling unwilling taxpayers with others’ bills is no more justified if the beneficiary attends college than if he works for a bank. The government should get out of the bailout business completely and protect people’s rights to keep and use their own income as they see fit.

According to a White House’s release, Obama’s executive order will hasten Congressional action to limit student loan repayment to 10 percent of discretionary income; forgive loans after 20 years; and facilitate federally-backed, consolidated loans at lower interest rates. (The idea that this can be done by executive order is legally suspect.) By way of comparison, consider what would happen if the federal government told credit card holders they could pay only a portion of their monthly bills, then stop paying entirely at some point. Obama’s scheme encourages people to take on more debt with the assurance that they will not have to pay it all back—and this while total student loan debt approaches a trillion dollars.

Just as federally promoted mortgages caused ballooning housing prices (until the mortgage crash), so federally promoted student loans cause skyrocketing tuition. Consider that, over the last decade, costs of four-year public institutions increased a yearly average of 5.6 percent beyond inflation; for private institutions the figure is 2.6 percent. Over the last thirty years, the inflation-adjusted cost of private schools has nearly tripled, while the cost of public schools has nearly quadrupled.

What are Americans getting for this folly? As Alex Tabarrok reviews, college enrollment has gone up by around 50 percent in the last 25 years, but “the number of students graduating with degrees in science, technology, engineering and math…has been flat.” What’s more: “In 2009 the U.S. graduated 89,140 students in the visual and performing arts, more than in computer science, math and chemical engineering combined…” Few taxpayers would subsidize such things if they had a choice.

Never fear, though, says Secretary of Education Arne Duncan in the White House release; the executive order has the magical ability to bail out those with student loan debt “at no cost to the taxpayer.” CBS reports, “A White House official says [the program] doesn’t cost taxpayers anything because when the loans are consolidated, the government no longer has to pay a subsidy to private lenders on the Federal Family Education Loan Program loans.” Back in reality, though, and as common sense dictates, the loan forgiveness and reduced payments “would cost taxpayers,” confirms the Atlantic’s Daniel Indiviglio. As for the consolidation program, it merely replaces subsidies for select lenders with subsidies for holders of student loans. The proper course is to let taxpayers off the hook, not hook them from another angle.

The leftist group Think Progress refers to student loans as “debt bondage,” as if people have no choice about whether to acquire education-related debt. But in fact people voluntarily agree to take on debt—and to pay it back with interest. The only “bondage” involved is that of taxpayers, who are forced to subsidize the debt.

True, as Indiviglio points out, the impact of Obama’s program is slight, cutting the bills of the average graduate less than $10 per month. But at issue is not the size of the bailout, but the fact that it forcibly transfers wealth from some people to others, violating the rights of the first group and turning the second into parasites. The more government acts on the notion that it is acceptable to bail out some at the expense of others, the more we will see injustices enacted into law.

View all articles by Ari Armstrong →
Yes, President Obama, We Can’t Wait…Fighting for Freedom is One Thing. Doing so Effectively is Another.
Return to Top