How to Actually “Separate Government from the Corporations” 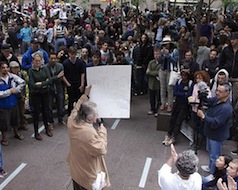 While the “Occupy Wall Street” movement offers little in the way of a coherent message, it tends to demonize corporations (while using myriad corporate products to organize the protests), demand more political handouts and economic controls, and attack capitalism. Once in a while, though, the “occupiers” offer a tidbit that, if placed in the right context, offers something resembling good advice. Such is the case with a message by an “Occupy Wall Street” supporter posted online: “In 1776 we separated our government from England. In 2012 we will separate government from the corporations.” What does it mean to “separate government from the corporations,” and how is that actually accomplished?

First, government should stop interfering with businesses activities (except to prevent force and fraud and to resolve contract disputes). Separation is a two way street. Government cannot be separated from corporations until corporations are separated from government. When politicians seek to “regulate” businesses, they necessarily invite corporate lobbyists to the political table. As P. J. O’Rourke says, “When buying and selling are controlled by legislation, the first things to be bought and sold are legislators.” Some businesses seek to manipulate the political rules to squash competitors; others simply try to mitigate the political damage to their ability to produce. When politicians (and their left-wing supporters) seek to control auto fuel standards, business mergers, radio and television broadcasts, the production of medical supplies, licensing for interior decorating, and a million other details of business, those politicians necessarily involve corporations in government.

Fourth, government should respect the free-speech rights of individuals who compose corporations. Unfortunately, when activists on the left say they want to limit corporate influence in government, often they mean they want government to forcibly muzzle the free speech of the individuals who form a corporation. But corporate speech, no less than religious speech, should be separated from government controls. The solution to preventing undue corporate influence in politics is not to trample the First Amendment, but instead to establish a truly free market in which government neither subsidizes businesses nor controls their activities.

Members of the “Occupy Wall Street” movement should be careful. If they logically think through their goal to “separate government from the corporations,” ultimately they will end up championing capitalism. And then they might decide that Pennsylvania Avenue offers a more appropriate center for a protest.