The Fall Issue of TOS 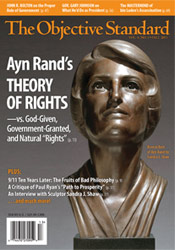 The print edition of the Fall issue is at press and will be mailed shortly; the online, e-book, and audio versions will be accessible to subscribers beginning September 20, 25, and 30 respectively. We’ve made John David Lewis’s article “9/11 Ten Years Later: The Fruits of the Philosophy of Self-Abnegation” available early and for free.

9/11 Ten Years Later: The Fruits of the Philosophy of Self-Abnegation
by John David Lewis

Ayn Rand’s Theory of Rights: The Moral Foundation of a Free Society
by Craig Biddle

An Interview with John R. Bolton on the Proper Role of Government

A Time to Betray: The Astonishing Double Life of a CIA Agent Inside the Revolutionary Guards of Iran by Reza Kahlili
Reviewed by Daniel Wahl

The Fear: Robert Mugabe and the Martyrdom of Zimbabwe by Peter Godwin
Reviewed by Daniel Wahl

The Bourgeois Virtues: Ethics for an Age of Commerce by Deirdre N. McCloskey
Reviewed by Richard M. Salsman

Gauntlet: Five Friends, 20,000 Enemy Troops, and the Secret That Could Have Changed the Course of the Cold War by Barbara Masin
Reviewed by John Cerasuolo

Crashing Through: The Extraordinary True Story of the Man Who Dared to See by Robert Kurson
Reviewed by Daniel Wahl

The Extra 2%: How Wall Street Strategies Took a Major League Baseball Team from Worst to First by Jonah Keri
Reviewed by Daniel Wahl

Delivering Happiness: A Path to Profits, Passion, and Purpose by Tony Hsieh
Reviewed by Daniel Wahl

My Lucky Life In and Out of Show Business: A Memoir by Dick Van Dyke
Reviewed by Daniel Wahl

If you’ve not yet subscribed to TOS, you can do so online or by calling 800-423-6151. The journal also makes a great gift for active-minded friends and relatives. Subscriptions start at just $29 and are available in print, online, e-book, and audio editions.