Of Saudi Savages and American Children 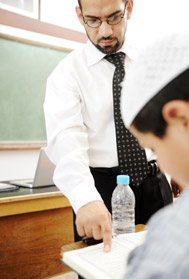 Nina Shea’s recent article, “Saudis' Vile, State-Sponsored Textbooks,” reveals nothing new, but the old news it relays is worth dusting off and shouting from the rooftops every now and then. It’s particularly relevant, for instance, in connection with the Saudis’ and other Islamist regimes’ agitations for Palestinian statehood and their threats of increased violence if it is not granted.

While Arab leaders warn that an international stalemate on Palestinian statehood threatens regional stability, it should be pointed out that some among them lay a foundation for such instability by, among other things, teaching students it is their obligation to commit violence against the religious “other.”

The prime example is Saudi Arabia’s national curriculum. Despite assurances in the State Department human rights report that the Saudi government has in the past year introduced “revised and newly written textbooks across the curriculum for most school grades,” these texts continue to promote violence against apostates and “infidels” of all stripes. Militant jihad is justified to “spread Islam” and exalted as “a profitable trade,” which “saves from painful punishment”. . . .

Top U.S. Treasury counterterrorism officials have called the Wahhabi teachings of these textbooks “kindling for Bin Laden’s match,” and warned that, without education reform, “we will forever be faced with the challenge of disrupting the next group of terrorist facilitators and supporters.”

Shea goes on to offer several harrowing excerpts from these textbooks. The situation, however, is much worse that she reports.

the Islamist regime in Saudi Arabia is funding American-slaughtering terrorist groups such as Al-Qaeda and the Taliban, building mosques and “cultural centers” across America, and flooding these Islamist outposts not only with hundreds of millions of dollars for “operating expenses” but also with a steady stream of materials calling for all Muslims “to be dissociated from the infidels . . . to hate them for their religion . . . to always oppose them in every way according to Islamic law” and, ultimately, “to abolish all traces of such primitive life (jahiliyya) and to reinforce the understanding and application of the eternal and universal Islamic deen [religion] until it becomes the ruling power throughout the world.” The Saudi-sponsored materials further specify that those who “accept any religion other than Islam, like Judaism or Christianity, which are not acceptable,” have “denied the Koran” and thus “should be killed.”

None of this is news, at least not to the U.S. government. The Saudis’ anti-infidel efforts have been tracked, documented, and reported for years. As the Rand Corporation concluded in a briefing to a top Pentagon advisory board in 2002, “The Saudis are active at every level of the terror chain, from planners to financiers, from cadre to foot-soldier, from ideologist to cheerleader.”