Gary Johnson on Republican Capitulation and His Presidential Bid 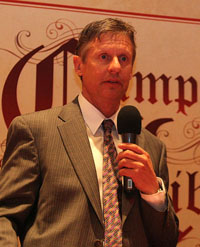 Here is a Q&A from Gary Johnson that was not included in his exclusive interview with TOS (which will be released tomorrow). Enjoy!

David Baucom: Although Republicans allegedly stand for lower taxes and greater freedom, for over half a century they’ve defined and conducted themselves in relation to Democrats—who have grown progressively socialistic. Republicans were once against an income tax, but then accepted it, and we got higher and higher rates. They were against Social Security, but then accepted and expanded that. They were against Medicare, but then embraced it. And they were against welfare, but accepted most of that.  How much of a role has this Republican slide played in causing the current fiscal crisis?  How much are they to blame?

Gary Johnson: I really believe both parties are to blame. I just go back to a few short years ago when Republicans controlled both houses of Congress and the presidency, and passed a prescription health care benefit—which at that time was the largest entitlement program ever passed—and ran up record deficits. So I see Republicans as part of the cause. I have not seen them as the solution here.

Basically, I am a Republican because I’ve always felt that Republicans do a better job when it comes to the checkbook, but, of late, I just see it as status-quo on both sides.  What America needs is a radical departure from business-as-usual, and that’s what my candidacy for president is all about.

I realize I’m practically in last place, but if you look at my resume, it suggests that I’m the guy who would actually stick to my guns when it comes to the radical change that needs to take place. That radical change starts with not spending more money than you take in. I am promising to submit a balanced budget in the year 2013 and to veto any expenditures that exceed what I consider to be “balanced.”

You could argue that they’ll just override that veto, and they probably will. But I would have been elected President promising to submit that balanced budget, and I think that budget, those expenditures, will come a lot closer to being balanced with a president who’s not going to accept any expenses or expenditures that aren’t balanced, as opposed to a president who’s going to do this over a fifteen to twenty year period, because “that’s the only prudent way to go about this.” To me, that’s just the end. I think the day of reckoning is here—I really believe that—and that it has to be addressed, and that we can do it.

Now I’m back to my own resume: I found good government easy—I didn’t find it difficult. I found it easy to stick by your principles, and that, by sticking by your principles you can really make a difference. That’s why I’m in this.

View all articles by TOS Admin →
The Fall Issue of TOSDon’t Bribe Pakistan; Warn It
Return to Top