Review: Crashing Through, by Robert Kurson

Crashing Through: The Extraordinary True Story of the Man Who Dared to See, by Robert Kurson. New York: Random House, 2008. 320 pp. $16 (paperback). 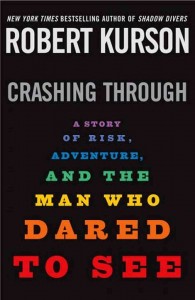 On a sunny spring morning in 1957, three-year-old Mike May and his older sister decided to make mud pies. After finding a glass jar in the family’s garage, Mike took it to a cement horse trough nearby and plunged it underwater to wash away the hard, dried powder inside.

Soon after, the powder—calcium carbide—reacted with the water to produce the explosive gas acetylene. When Mike’s mother, Ori Jean, rushed into the backyard upon hearing a loud bang, she found him whimpering on the ground, drenched in blood, with shards of glass all around.

Ori Jean called for an ambulance and then followed it to the nearby hospital. In the emergency room, doctors swarmed around Mike. “He had lost massive amounts of blood from his face, neck, arms, stomach, everywhere. Critical veins in his wrists had been slashed” (p. 19). The doctors told Ori Jean that he was going to die.

But Mike was not dead yet, and his doctors kept working on him. They sent him to specialists in El Paso by helicopter, trailed—on the ground—by his mother, driving as fast as she could. When she reached the specialists, they told Ori Jean to expect the worst and say good-bye to her son, whom they pulled into the operating room.

Five hours later, Ori Jean learned that it took five hundred stitches to quilt Mike together, but that the doctors had done the seemingly impossible. Although he was blind, Mike was still alive—which, to his mother, was all that mattered. Robert Kurson tells what happened next in Crashing Through: The Extraordinary True Story of the Man Who Dared to See, a book that follows Mike and his many adventures to the present day.

Kurson relays how Ori Jean did not prevent Mike from investigating the world, which he found fascinating even though this meant constantly crashing into obstacles. On Mike’s childhood, Kurson tells us:

The neighborhood children had no idea what to make of a blind kid. Diane [his sister] told them, “He’s really good at stuff,” but they still picked him last for their teams. He swung at baseballs and missed wildly. He ran into trees instead of second base. He fell down all the time.

But he could also boot a kickball to the clouds and quickly find kids in games of hide-and-seek. He wasn’t afraid of blood. Before long, the children didn’t much notice when Mike crashed his skateboard or jumped into the bushes with his pogo stick. He was playing and they were playing. . . .

Soon enough Mike decided to ride a bicycle. Just the idea of it—to be able to move so swiftly and independently—thrilled him. He borrowed Diane’s and began to pedal. The bike traced an ampersand on the street and then toppled onto him. Mike tried again. He fell again. He crashed for two more days, seasoning the street with bits of skin as Ori Jean told him, “You’re getting there.”

At school, things were just the same. Mike took tetherballs to the face and dodgeballs to the groin. He bloodied his nose, cracked toes, and broke fingers. While running to first base in kickball, he stepped on top of the ball, fell backward, and bashed his head on the pavement. He was unconscious for twenty minutes and rushed to the hospital. When he returned to school the next week, he played again. (pp. 24–25)

Such an attitude toward life is remarkable even among kids who can see. But Kurson does not dwell on Mike’s childhood for long. He takes the reader with Mike as he learns to get around by listening to echoes, builds an eighty-foot tower, rides horses through the wilderness, goes to university, travels to Ghana, joins the CIA, breaks a world record in skiing, starts up companies, romances beautiful women, finally marries one, and with her raises two much-loved sons. . . .

View all articles by Daniel Wahl →
Review: Gauntlet, by Barbara MasinReview: The Extra 2%, by Jonah Keri
Return to Top