Review: A Time to Betray, by Reza Kahlili

A Time to Betray: The Astonishing Double Life of a CIA Agent Inside the Revolutionary Guards of Iran, by Reza Kahlili. New York: Threshold Editions, 2010. 352 pp. $26 (hardcover). 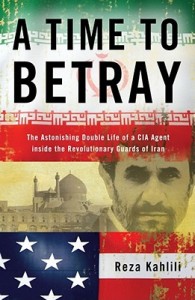 At the start of A Time to Betray, Reza Kahlili writes that this is “a true story of my life as a CIA agent in the Revolutionary Guards of Iran.” As such, you might expect it to be a fast-paced thriller—and, if so, you’d be partially correct. A Time to Betray involves many intense moments, but its primary focus is on the choices that Kahlili and his two childhood friends made growing up in Iran, along with the sometimes-deadly consequences.

One of those friends, Kazem, always took religion seriously, hated the Shah, and, when the Shah was overthrown, became a supporter of Khomeini and a devoted member of the Intelligence Unit of the Revolutionary Guards.

Soon after the Shah’s overthrow, Kazem asked Kahlili to join the Guards. Having just returned from studying in the United States and being eager to help improve his country, Kahlili joined. Looking back today, he explains that, like many Iranians, he naïvely believed Khomeini and the mullahs would keep their promise not to force their faith on Iranians.

Kahlili’s other childhood friend, Naser, was not so naïve. Although he, too, was happy to see the Shah overthrown, Naser began speaking out against Khomeini soon after. He explained his reasons to Kahlili:

“Look around, Reza. Everything is changing. Banning the opposition parties, shutting down the universities, attacking whoever disagrees with them. They’re taking our rights away. They’re arresting innocent people for nothing more than reading a flyer.”

I tried to calm him down, attempting to soothe my own rattled nerves at the same time. “We’re in a transition, and change is always difficult. Maybe you should be more careful. Things will get better, you’ll see.”

Naser took a moment before speaking again. When he did, there was pain in his voice. “I wish I felt the same way, Reza. I don’t want to argue with you, but if people don’t speak up now, it will only get worse.” (p. 60)

Numerous times, we see the young Kahlili not wanting to take sides, simply wanting everyone, in spite of everything, to get along. Indeed, this approach appears to have been his MO from childhood. Kahlili writes that, as a child, he found it tough just to stand up to his mother and friends. How could he, as an adult, stand up to the government of Iran? Something compelling would have to happen—something that threatened or assaulted his values on a personal level. Unfortunately, something did. . . .