Review: The Fear, by Peter Godwin 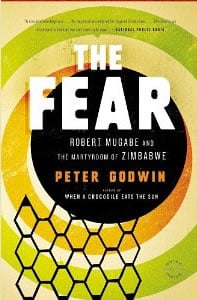 Many books have documented horrible details of what happens under dictatorship. The Fear: Robert Mugabe and the Martyrdom of Zimbabwe presents some of the most horrific. In it, Peter Godwin captures the recent and ongoing struggle of Zimbabweans under a reign of lawlessness and terror.

The book begins in 2008, as Godwin is on his way “home to Zimbabwe, to dance on Robert Mugabe’s grave” (p. 5). Despite rigging the latest elections and intimidating the voters, as he has for many years, the aging dictator has been rejected so resoundingly that it seems he will have to accept defeat.

After flying into Harare, the capital of this formerly rich and now starving country, Godwin says that “[Mugabe’s] portrait is everywhere still, staring balefully down at us.”

From the walls of the airport, as the immigration officer harvests my U.S. dollars, sweeping them across his worn wooden counter, and softly thumping a smudged blue visa into my passport. From the campaign placards pasted to the posts of the broken street lights, during our bumpy ride into the reproachfully silent city. Watched only by the feral packs of hollow-chested dogs, [Mugabe] raises his fist into the sultry dome of night, as though blaming the fates for his mutinous subjects. The Fist of Empowerment, his caption fleetingly promises our insect-flecked beams. (pp. 5-6)

As Godwin makes his way into Harare, pickup trucks crowded with armed officers repeatedly pass him by. “The atmosphere,” he says, “is tense with anticipation” (p. 8). Something historic is about to happen. Unfortunately, however, Mugabe does not concede defeat, and there is “no political grave upon which to dance”—at least not one belonging to Mugabe (p. 14). But there will be many graves soon, an untold number of them, as Mugabe and his goons “know the places they didn’t do well” and plan to ensure they do better by terrorizing the local populace into changing their votes (p. 28).

Godwin skillfully shows what led up to the impending massacre. According to him, there was no single point at which Mugabe the “liberation hero” became Mugabe the “tyrannical villain.” And that, says Godwin, is because there was no metamorphosis: “Robert Mugabe has been surprisingly consistent in his modus operandi. His reaction to opposition has invariably been a violent one” (p. 30). . . .