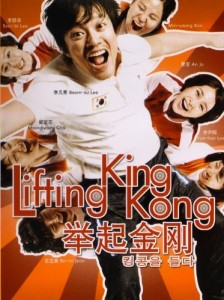 he beginning of Lifting King Kong, a South Korean film based on a true story, a weightlifter readies for his third attempt to lift 195 kilograms (429 pounds). As he walks onstage, viewers see the Seoul crowd waving their flags and cheering. But the man seems unaware. He closes his eyes, takes in a breath, and then—as he opens his eyes—breathes it out. He shakes his arms, appears ready, and with a scream, “Hyaa!,” steps to the barbell.

The weightlifter kneels down into a squat, places his hands on the bar around shoulder-width apart, and stops. “Hyaa!” He pushes up, sweeping the barbell as he stands and holding it at his collarbone, parallel with the ground. As he prepares to raise it above his head, the camera pans the crowd roaring their approval. The weightlifter squats a bit, the muscles in his neck drawn tight. Then, with a slight bounce, his left leg comes forward and his arms push the weight up until it balances triumphantly but precariously above his head.

Again, we see the crowd cheering like mad and hear his coach shouting, “You’ve got the gold!” But there’s a problem. His right foot seems to want to give. Again, his coach shouts encouragement: “You’re almost there Jibong! Just a little more!” But rather than his foot failing, Jibong’s left elbow does. The camera shows the barbell as it drops behind him, pulling him backward and onto the ground with it. The weightlifter screams in pain, looking to his left at his deformed elbow.

“This,” says a Korean announcer, “is a shocking and unfortunate turn of events.” As viewers watch medics rush the stage, he continues: “Korea’s top weightlifter, Lee Jibong, will unfortunately have to settle for bronze because of an injury.”

Things do not get much better for Jibong (played by Lee Beom-soo). In fact, they quickly get a lot worse. His elbow requires surgery. But much worse, he learns that his heart is overactive and he will have to give up lifting weights permanently. That means he will not get another chance for a gold medal; he is stuck with the bronze. It is a moving introduction to one of the movie’s main characters.

After the opening credits that follow, Lifting King Kong introduces the other main character. It is now 2008, twenty years after Jibong’s failed attempt at the gold, and another weightlifter lies facedown on a mat, receiving a massage. . . .

View all articles by Daniel Wahl →
Review: Captain America: The First AvengerReview: A Time to Betray, by Reza Kahlili
Return to Top