Review: The Extra 2%, by Jonah Keri 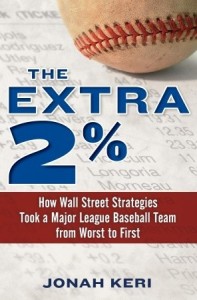 For ten years, the Tampa Bay Devil Rays ambled up to home plate and struck out. They were the worst team in Major League Baseball, averaging ninety-seven losses per season and finishing last in nine out of ten. They were, in short, the laughingstock of the league—not to mention late-night TV.

In a 2003 episode of the Late Show with David Letterman, Roger Clemens read from the list of the “Top 10 Things Baseball Has Taught Me.” Checking in at number four: “The best practical joke? Tell a teammate they’ve been traded to the Devil Rays.” (p. 5)

But the problem with the Devil Rays was not just that they always lost or that the entire league laughed at them. The team’s owner was a notorious cheapskate with a volatile temper whose antics were so terrible that he turned the team’s hometown against them.

It would have been hard for things to get worse. Indeed, they got better—and Jonah Keri tells how in The Extra 2%: How Wall Street Strategies Took a Major League Baseball Team from Worst to First.

The book starts like a typical Hollywood script, with a businessman playing the role of villain. Keri tells how Vincent J. Naimoli came to own the Tampa Bay Devil Rays and details the ways Naimoli was “the Wrong CEO” for the team.

For one, Naimoli was a miser on the order of Ebenezer Scrooge, penny-pinching even at the price of employee productivity and happiness. Naimoli reused paper when writing memos, refused to buy Internet access for the office, and forced staff to bring a satchel of mail with them when traveling to a company branch (owing to the cost of stamps). And, as Keri says, “he was damn proud of it” (p. 34). . . .

View all articles by Daniel Wahl →
Review: Crashing Through, by Robert KursonReview: Delivering Happiness, by Tony Hsieh
Return to Top