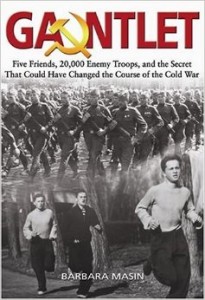 As a child, Barbara Masin had a favorite bedtime story: her father’s retelling of the time he (Pepa), her uncle Radek, and their friend Milan hid under a pile of branches to elude East German troops who were hunting them down. This cliff-hanger of a story, told to her in fragments, never seemed complete. Pepa Masin did not talk much about what came before and after this adventure, and the story he did tell—of a daring escape from Communist Czechoslovakia through East Germany to the freedom of West Berlin—seemed incredible. It was easy to understand the desire to escape to the West, but why were twenty-four thousand East German and Soviet troops deployed to stop five lightly armed young Czechs? And how did her father and his friends survive against such overwhelming odds? Barbara Masin finally found the answers after teaching herself rudimentary Czech and painstakingly researching recently opened secret police archives from Germany and the Czech Republic.

The result of Masin’s research is Gauntlet, the gripping story of these young Czech freedom fighters determined to escape to the West, join the U.S. military, and return to overthrow the evil Communist regime that was terrorizing their country. . . .

John Cerasuolo is CEO of Leap Partners in Nashville, Tennessee and serves as Chairman of the Beacon Center of Tennessee, a free market think tank. He holds a BS in political science and economics from the United States Naval Academy (1983) and an MBA from Clemson University (1995).

View all articles by John Cerasuolo →
Review: The Bourgeois Virtues, by Deirdre N. McCloskeyReview: Crashing Through, by Robert Kurson
Return to Top