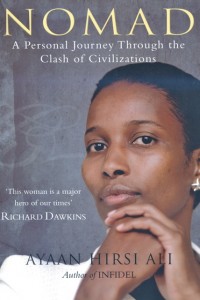 Ayaan Hirsi Ali gained international recognition in 2004 after she and Dutch filmmaker Theo van Gogh made Submission, a documentary about the brutal oppression of women under Islamic law. In response to the film, a radical Muslim savagely murdered van Gogh on the streets of Holland and posted a note on the filmmaker’s body in which he threatened Hirsi Ali’s life as well. Nevertheless, in 2007 Hirsi Ali wrote Infidel, in which she recounts the horrors of growing up female under the rights-violating Islamic cultures in Somalia and Saudi Arabia; how she fled to and settled in Holland, worked menial jobs, attended university, and collaborated on Submission; and how, in 2003, she ran for and was elected to the Dutch parliament as a candidate with a single issue: to stop the oppression of and violence against Muslim women in Holland.

In Infidel, Hirsi Ali championed the Western secularist ideals that she came to adopt as true and right—free inquiry, the equal rights of the sexes, individualism, and personal liberty. Since then, she has moved to the land that she declares in her follow-up book, Nomad, to be her final home: the United States. In this latest book, Hirsi Ali shares the observations and emotional journey she has made since leaving Europe and arriving in America, even as radical Muslims continue to threaten her life for her uncompromising condemnation of Islam.

In some respects Nomad demonstrates that Hirsi Ali has not only retained the intellectual independence and moral courage at the heart of her prior book, but that she has also strengthened and developed her thinking on the secular values she came to embrace.

For example, in Nomad she elaborates on Enlightenment principles, including free inquiry, individual freedom, and property rights, exercising a thought process that grasps fundamentals:

Every important freedom that Western individuals possess rests on free expression. We observe what is wrong, and we say what is wrong, in order that it may be corrected. This is the message of the Enlightenment, the rational process that developed today’s Western values: Go. Inquire. Ask. Find out. Dare to know. Don’t be afraid of what you’ll find. Knowledge is better than superstition, blind faith, and dogma. (p. 214)

View all articles by Joseph Kellard →
Review: A Time to Betray, by Reza KahliliReview: The Fear, by Peter Godwin
Return to Top