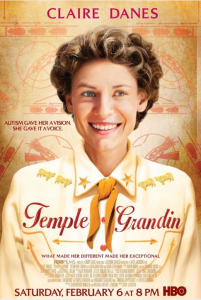 Recently released on DVD, HBO Film’s Temple Grandin is the true story of animal behaviorist Temple Grandin, a brilliant scientist and engineer who single-handedly reformed the meatpacking industry by improving both the way cattle are treated and the means by which the animals are led to slaughter. What makes Grandin, currently a professor at Colorado State University, of particular interest as the subject of a docudrama is not only the way she helped the beef and cattle industry become more efficient and profitable, but also the fact that she is autistic.

The television film, written by Christopher Monger and Merritt Johnson, is based on several books by Grandin and details her life from the time that she was diagnosed as autistic—when she was a toddler—to her postdoctoral years in the early 1980s. What makes Grandin even more remarkable is her rivetingly powerful self-awareness of her disability; how she compensates for it, by “thinking in pictures”; and how she uses her unique situation and skills to get “into” the minds of the animals she studies.

Claire Danes, who plays Grandin, deserves particular kudos for her performance (she justly won an Emmy for the role), which is rich and believable. Grandin is profoundly independent, driven, and self-interested; once she sets her mind to a goal, she never gives up and never backs down—and she always does what is right for herself and the animals she loves. With Danes’ portrayal, viewers love and root for Grandin from beginning to end. Though it may be a cliché to describe such a film as “feel-good” or “inspiring,” that is exactly what Temple Grandin is. One cannot help but be mesmerized and energized by the story. . . .

View all articles by C. A. Wolski →
Review: IraniumReview: Surrender Is Not an Option, by John Bolton
Return to Top