Review: Surrender Is Not an Option, by John Bolton

Surrender Is Not an Option: Defending America at the United Nations and Abroad, by John Bolton. New York: Simon & Schuster, 2007. 486 pp. $27 (hardcover). 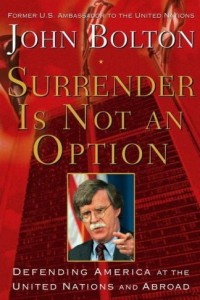 What is it like to be an American diplomat trying to advance U.S. interests? In Surrender Is Not an Option: Defending America at the United Nations and Abroad, John Bolton recounts his harrowing experiences in the foreign policy establishment of the United States government. The book is an enlightening introduction to the bureaucratic machinations that guide our foreign policy.

At the book’s start, Bolton describes himself as a “libertarian conservative” (p. 7) and tells why he agreed to join the Agency for International Development (AID) when Reagan offered him the appointment in 1980.

I was attracted to AID because it involved both U.S. foreign policy and domestic policy in the recipient countries. Our goal was to make AID’s programs more market-driven, to induce recipient countries to foster private enterprise, and to turn AID away from a welfare-oriented approach known as “basic human needs.” This rubric disguised a belief that poverty in developing countries was caused by a lack of resources and that poverty could be overcome by developed countries’ transferring the missing resources. I regarded this as essentially backward: The creation of wealth by developing countries was the long term cure to their poverty, which they could accomplish by market-oriented policies that rewarded rather than penalized domestic and foreign trade and investment. (p. 20)

While there, Bolton helped return $28 million to the Treasury, by “canceling AID projects around the world that were failing” (p. 20). He also had his first professional contact with the UN, where he says he learned much about the behavior of countries at international bodies—for instance, that “countries with which the United States has close bilateral relations are not always helpful in such bodies” and that “this was just business as usual at the UN” (p. 21).

Bolton relays how, during the first Bush administration in 1989, he served under Secretary of State James Baker as assistant secretary for International Organization Affairs (IO), a position “responsible for overseeing the entire UN system” (p. 31). In his capacity as assistant secretary of IO, Bolton successfully opposed attempts by the Palestinian Liberation Organization (PLO) to join the World Health Organization (WHO) as well as the United Nations Educational, Scientific and Cultural Organization (UNESCO) by threatening to withdraw funding or refusing, in the case of UNESCO, to rejoin the organization from which the United States had previously withdrawn “to protest its blatant anti-American bias” (p. 33). During the Clinton years, Bolton joined the American Enterprise Institute as senior vice president, which he says gave him the chance to “write and speak extensively on a wide variety of foreign policy issues” (p. 45).

In early 2001, newly appointed Secretary of State Colin Powell offered Bolton the job of undersecretary of state for arms control and international security affairs, known as “T.” Bolton accepted and was given the task of convincing the State Department bureaucracy to recognize the failure of its diplomatic efforts with North Korea. Bolton describes one such failed effort, the Clinton administration’s 1994 Agreed Framework, as follows:

This bilateral DPRK-U.S. deal provided that the North would abandon all efforts to acquire nuclear weapons, including freezing the reactor and other facilities at Yongbyon under the inspection of the International Atomic Energy Agency (IAEA). In exchange, North Korea was to receive two bundles of carrots: an annual supply of five hundred thousand tons of heavy fuel oil and the two light-water nuclear reactors to be built by South Korea and Japan. (p. 101)

Bolton does not hesitate to expose this agreement for what it is:

In short, the Clinton policy and the Agreed Framework were classic illustrations of the delusion that a rogue state could be coaxed out of nuclear weapons, and were embarrassments to the United States. Former secretary of state Jim Baker correctly characterized it as “a policy of appeasement.” (p. 101)

Bolton explains that he thought he had initial support for his view of the agreement when President Bush quickly shot down Colin Powell’s attempt to support the Clinton effort. But he goes on to reveal how the State Department Bureau of East Asian and Pacific Affairs (EAP) relentlessly pressed for talks and with Bush’s support finally sent representatives to North Korea in the fall of 2002, where the North Koreans “unmistakably admitted they did have a uranium enrichment program under way” thus effectively shredding the Agreed Framework (p. 113). Even after he was proven correct, however, the strong international sanctions Bolton recommended were not enacted (p. 118).

Worse still, Bolton shows how the United States waited patiently while the EU-3 (Germany, France, and the United Kingdom) attempted to use the same policy of appeasement with Iran in the hopes of somehow getting different results. When it became clear from intelligence that Iran was violating its commitments to the International Atomic Energy Agency (IAEA), Bolton says, he “wanted to pursue Iran in the IAEA board of governors . . . to move the entire matter to the [UN] Security Council where we could try to impose sanctions” (p. 136). He points out, however, that his efforts were blocked and delayed at every step by opposition at the State Department and continued efforts by the European foreign ministers to further water down any demands for Iran to stop its nuclear program. In the end, Bolton says, “I was not able to convince enough other people above me of the seriousness of Iran’s threat . . . time just ran out on me as I left State” (p. 131).

At the beginning of George W. Bush’s second term, newly appointed secretary of state Condoleezza Rice asked Bolton if he was interested in being nominated to the U.S. Mission to the United Nations (USUN). Bolton, having worked with the UN previously and having studied and written extensively about it, wanted the job. He says he insisted that the United States should “absolutely not” withdraw from the UN and that he believed that “the UN could serve U.S. foreign policy interests” even though “there was an enormous amount that needed to be fixed” (p. 167). Despite endorsements by several prominent former diplomats, including Jim Baker and Jeane Kirkpatrick, his nomination process faced obstacles from Democrats who, in his words “encouraged every rumor, every speculation, and every dissatisfied bureaucrat to emerge” to oppose his appointment (p. 183). Nevertheless, on August 1, 2005, during Congressional recess, President Bush announced the appointment of Bolton to the USUN (pp. 194–95).

Bolton describes in excruciating detail how his efforts at reform were strongly resisted at the UN and ironically, but not surprisingly, internally at the State Department (pp. 239–45). Bolton concludes:

No mandates were eliminated, none were consolidated, and none were reformed. The only conclusion I could reach was that efforts at merely incremental or marginal reforms in the UN system were doomed to failure, and that we needed far more sweeping reform, such as shifting from assessed to voluntary contributions. . . . Whether such reforms could be enacted was highly uncertain, to be sure, but so were any lesser reforms, as our recent experience had demonstrated. (p. 245)

After his second shot at congressional confirmation failed, Bolton decided to leave the administration due to his increasing policy differences (p. 426).

Bolton concludes his book with a review of the strategic situations facing the United States in the coming years, and with suggestions about how to proceed. Of note, he emphasizes that the United States needs to continue the battle against “Islamic terrorism,” describing the worldview of both the Sunni and Shia “extremists” as “unmistakably totalitarian, based not on ideology . . . but on theology . . . [a] brand of totalitarianism [that] has rarely been seen in the West, at least since the Renaissance” (p. 439).

According to Bolton, the United States should avoid channeling all or most of its international diplomatic activities through the UN. Among the more effective alternatives he cites as available to the United States are unilateral action, bilateral alliances, multilateral defense alliances, ad hoc military coalitions, regional organizations, and enforcement coalitions of the willing (p. 441). These options, he says, ought to be selected according to whichever one best serves U.S. interests in a given situation.

Regarding the UN, Bolton writes that “it is inherently untenable that America submit to any decision-making process in which it is simply one nation with one vote among 192 ‘equal’ nations” (p. 442). Bolton thinks that prospects for incremental UN reform are bleak and that the United States should essentially follow a policy of divide and conquer at the UN, working to marginalize EU influence and to break up the other large reflexively anti-American blocks (pp. 446–47).

Bolton also argues that a “cultural revolution” is necessary at the State Department, where a culture has emerged that does not represent American interests. Diplomats ought to engage in “aggressive advocacy of U.S. interests” (p. 452) and lose the endemic “clientitis,” which Bolton defines as “excessively advocating the interests of the country or region for which an official is responsible” (p. 450). Similarly, Bolton attacks several other ideas prevalent among foreign service officers, including the idea of “mirror imaging” in which U.S. diplomats assume that the foreign diplomats they encounter are as “reasonable, moral, practical, and most importantly, a sophisticated woman or man of the left” (p. 452).

Surrender is Not an Option is not an easy read, both because of the disturbing history and state of U.S. diplomacy, and because it involves constellations of events and personalities that tax the mind. But the book is an important inside look at U.S. foreign policy from the perspective of someone who is avowedly pro-American. Although Bolton’s recommendations for change fall short of a fully principled, fully self-interested approach to foreign policy (which would include, among other things, an immediate departure from the morally corrupt UN), they could constitute an important first step toward a foreign policy of American self-interest.

View all articles by Gideon Reich →
Review: Temple GrandinReview: The Infidel: Chapter One, by Bosch Fawstin
Return to Top