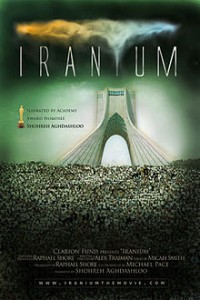 Many Americans are concerned about the Iranian regime’s progress in its efforts to obtain a nuclear weapon, yet few are demanding that the U.S. government do anything about it. Iranium, a new documentary by Alex Traiman, seeks to change that.

Narrated by Shohreh Aghdashloo, and with commentary by (among others) John Bolton, Bernard Lewis, Michael Ledeen, and Reza Kahlili, the documentary begins by looking at both the founding ideology and the constitution of the Iranian regime. It shows the Ayatollah Khomeini following the overthrow of the shah, saying, “When we revolted, we revolted for the sake of Islam. موقع رهان كرة القدم ” It shows footage of him calling for a global caliphate: “This movement cannot be limited to one country only. It cannot be limited to Islamic countries either.” And it shows how Iran’s constitution codifies those views, establishing a nation “in accordance with Islamic law,” providing “the necessary basis for ensuring the continuation of the revolution” toward “a universal and holy government” and “the downfall of others.”

“From the very beginning, explains Kenneth Timmerman, executive director of the Foundation for Democracy in Iran, Iran’s leaders “considered terrorism as a tool of policy. . . . Iran set up Hezbollah . . . to have a ‘cut-out’ [that] could ‘independently’ carry out terrorist attacks with ‘no fingerprints’ back to Tehran.”

Iranium lines up the facts like a long series of dominoes, enabling viewers to see how the murderous ideology at the foundation of modern Iran led to a constitution demanding its implementation, which, in turn, led to the creation of terrorist proxies and the terrorizing and murdering of Americans and other “infidels” worldwide.

The documentary also shows how the Iranian regime implements the Islamic ideal within its own borders, creating hellish conditions for those who live there. موقع قمار اون لاين Consequently, some sections of Iranium are very difficult to watch. For example, after an Iranian refugee remarks that Iran executes women for the “crime” of being raped, we see real footage of a woman hanging from a rope, her feet kicking through the air as she struggles in vain. Likewise, we see a mob stoning two women for supposed adultery, small boys being forced to run through minefields, and the last moments of twenty-six-year-old Neda Agha-Soltham, who, during the 2009 protests against the fraudulent elections, was shot to death by a regime sniper.

Iranium’s powerful and effective integration of such facts and footage distills the nature of the Iranian regime, shows its roots in Islamic doctrine, and segues into the film’s clarification of the threat posed by a nuclear-armed Iran. . . .

View all articles by Daniel Wahl →
Interview with Andy Kessler about the Virtue of Eating PeopleReview: Temple Grandin
Return to Top