While religious leaders want to establish the kingdom of heaven on Earth, the heroes of Philip Pullman’s His Dark Materials trilogy (The Golden Compass, The Subtle Knife, The Amber Spyglass) seek to overthrow the oppressive “kingdom” of heaven and establish a “republic” in its stead. This is the driving action in Pullman’s “young adult” fantasy series. And although the books are marketed to teens, the stories will, like all good literature, reward readers with more years and a few gray hairs as well. 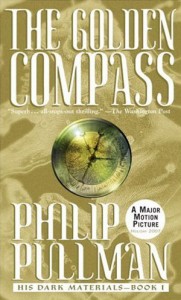 The first novel, The Golden Compass (originally published in the United Kingdom as The Northern Lights) opens on a parallel Earth where humans and their daemons—the physical manifestations of their souls—live under the suffocating control of the Church and its security apparatus, the Magisterium. But oppression is furthest from the mind of twelve-year-old Lyra Belacqua and her daemon (pronounced “demon”) Pan: They’re too busy getting into trouble and having adolescent adventures in and around Oxford, in particular hassling the children of the Gyptians, wanderers who visit yearly on their barges. The Oxford kids and the Gyptian youngsters engage in a good-natured conflict in which they “gobble” each other, “Gobblers” being this Earth’s bogeymen. But things take a decidedly more grown-up turn when Lyra gets wrapped up in the machinations of her uncle, Lord Asriel, an explorer and iconoclast.

After saving Asriel from an assassination attempt and learning from him and his colleagues a bit about the mysterious “Dust,” a subject that the other adults avoid discussing at all costs, Lyra is introduced to the malevolent Mrs. Coulter and is subsequently sent to live with her. Before she leaves Oxford, Lyra is given a truth-telling device called an altheiometer—the golden compass of the title. Powered by Dust, it can discern what’s hidden in the heart of any man, woman, or beast. While living with Mrs. Coulter—who, naturally, covets the altheiometer—Lyra discovers that Gobblers actually exist and have been kidnapping children for a dark purpose related to Dust. Eventually, Lyra goes north to rescue a kidnapped friend and makes the acquaintance of aeronaut Lee Scoresby and his rabbit daemon Hester, as well as witches and militaristic armored polar bears. The novel ends on a cliffhanger—and a dark revelation about the nature of Lord Asriel’s work. . . .

View all articles by C. A. Wolski →
Letter to the Editor
Review: Anti-intellectualism in American LifeReview: Moonwalking with Einstein, by Joshua Foer
Return to Top