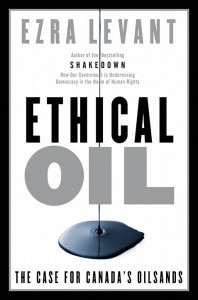 Oil is crucial to human life, not only as a source of energy that fuels our homes, businesses, cars, airplanes, and hospitals, but also as a key component of countless products on which our lives and prosperity depend—from medical devices and cell phones, to roads and tires, to books, CDs, footballs, and tablecloths. Nonetheless, the oil industry and the men who animate it are widely loathed and frequently maligned. Read any news outlet for examples. In the face of this relentless anti-oil sentiment, Ezra Levant has written Ethical Oil: The Case for Canada’s Oil Sands.

Levant explains that conventional oil fields (such as those in Iran and Saudi Arabia) have been decreasing production at a rate of 6.7 percent per year due to depleted reserves, and that, today, the largest exporter of oil to the United States is Canada (having displaced Saudi Arabia in 2004). Most of the oil produced in Canada, he notes, is extracted in Alberta in a geologically marvelous region called the Athabasca Oil Sands.

Unlike conventional liquid oil, the oil sands are a type of bitumen—“oil mixed with sand and clay . . . [that] has the thickness of peanut butter”—that is more difficult and expensive to extract (p. 8). Levant explains that higher oil prices, and hence higher oil company profits, have led to capital investment in new technologies and extraction processes that have made “the oil sands economically viable” (p. 9).

The first oil company to work the oil sands region was Suncor, in 1967. The open-pit mines that many people think of when picturing the oil sands are a relic of the early days of oil exploration and extraction. Today,

Alberta’s oil sands are easily one of the most technologically advanced resource operations in the world. Behind every dump-truck driver are teams of computer modellers, engineers, geologists, and technical operators. For every strong back working a shovel, there are a dozen M.A.s and Ph.D.s somewhere working a computer. (p. 117)

Most of the thick bitumen (80 percent) is deep in the ground and must be drilled for and pumped out using steam-assisted gravity drainage (SAGD), whereby steam is injected to reduce the viscosity of the bitumen, which then drains, by force of gravity, into a pipe below the steam and is pumped out. Using this technology, Canadian oil sands companies are able to transform what was once “considered an experimental project” into an oil-generating powerhouse (p. 9). . . .

View all articles by Andrew Brannan →
Review: Why ObamaCare is Wrong For AmericaReview: Anti-intellectualism in American Life
Return to Top