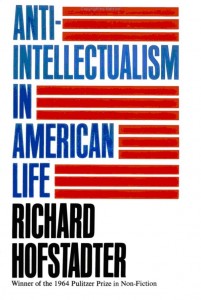 Imagine you are touring America—not its landscapes or buildings, but its intellect and soul. You have two guides. Both are practiced speakers who walk quickly from site to site, dazzle you with their commentary on a variety of subjects, and mix their personal views with statistical profiles.

Such an experience awaits those who tour a dark facet of the history of American culture through two books: Richard Hofstadter’s Anti-intellectualism in American Life and Susan Jacoby’s The Age of American Unreason. Each author focuses on the social and political phenomenon of “anti-intellectualism.” For our purposes, that phenomenon may be defined as social and political opposition to the practice of applying broad abstractions—usually learned from philosophers—to social issues. The two authors maintain that the application of such abstractions by intellectuals poses a threat to the social and political ambitions of some individuals (creationists and populists being classic examples), provoking their antipathy toward both the intellectuals’ ideas and the intellectuals themselves.

The elder guide in this case is Hofstadter, a history professor writing in the late 1950s. His purpose is “to shed a little light on our cultural problems.”

[W]hat I have done is merely to use the idea of anti-intellectualism as a device for looking at various aspects, hardly the most appealing, of American society and culture. Despite the fringes of documentation on many of its pages, this work is by no means a formal history but largely a personal book, whose factual details are organized and dominated by my views. (AAL, p. vii)

The heart of Hofstadter’s book is parts 2–5, which cover what Hofstadter considers to be the main homes of anti-intellectualism in America: religion, politics, business, and education. The order of the four core parts and of the discussions within each part is generally chronological. In the first of part 2’s three chapters, “The Evangelical Spirit,” Hofstadter focuses on what he holds was the anti-intellectualism lurking in the culture at the time of our nation’s founding:

The American mind was shaped in the mold of early modern Protestantism. Religion was the first arena for American intellectual life, and thus the first arena for an anti-intellectual impulse. Anything that seriously diminished the role of rationality and learning in early American religion would later diminish its role in secular culture. The feeling that ideas should above all be made to work, the disdain for doctrine and for refinement in ideas, the subordination of men of ideas to men of emotional power or manipulative skill are hardly innovations of the twentieth century; they are inheritances from American Protestantism. (AAL, p. 55)

This passage is typical of both the virtues and vices of our elder guide’s style. It flows well and offers interesting observations, but at the end of the passage the objective reader must stop and ask himself, “What exactly did Hofstadter just say?” For example, readers might not understand (until later in the book) that “made to work” is an oblique reference to the anti-intellectual notion that ideas are acceptable only where they apply immediately to everyday concerns, that is, “practical” in a way that excludes theories and other forms of integration.

From that nebulous opening, our tour guide proceeds to do what he does best, which is narrating a flow of events accompanied by specific dates as well as names of persons, places, and publications that conveyed the views of intellectuals and their foes, the anti-intellectuals. The core of the book is not a philosophical analysis of anti-intellectualism or a history of the idea of anti-intellectualism. It is a social history, specifically a history of the struggle between various social and political groups wherein one side attacks the other side’s intellectualism—as when Christian fundamentalists rejected Darwin’s scientific theory of evolution in favor of a direct reading of the Bible’s account in Genesis. Hofstadter elaborates: . . .