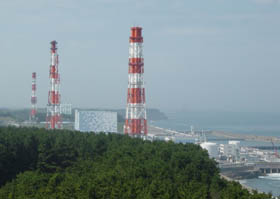 William Tucker, however, writing in the Wall Street Journal, explains that the fear mongering is unfounded and that Japan Does Not Face Another Chernobyl:

The core of a nuclear reactor operates at about 550 degrees Fahrenheit, well below the temperature of a coal furnace and only slightly hotter than a kitchen oven. If anything unusual occurs, the control rods immediately drop, shutting off the nuclear reaction. You can't have a "runaway reactor," nor can a reactor explode like a nuclear bomb. A commercial reactor is to a bomb what Vaseline is to napalm. Although both are made from petroleum jelly, only one of them has potentially explosive material.

It is also worth noting that the relatively free and correspondingly competent Japanese of today are nothing like the essentially enslaved and thus practically helpless Soviets of the 1980s. To compare the current situation with that of the Chernobyl disaster is to ignore the vast difference between the two cultures. Whereas the Soviet Union’s totalitarian system largely prevented men from using their minds, Japan’s highly liberated economy enables men to think, to produce, to excel.  Because men in modern-day Japan have been relatively free to deal with reality in accordance with their rational judgment, they have been able to produce nuclear power plants of exceptionally high quality and safety. And for the same reason, the Japanese will solve the problems at hand in due course.

(For a more technical explanation of why the nuclear reactors in Japan are not the major concern that many are making them out to be, see Morgsatlarge’s post, “Why I am not worried about Japan’s nuclear reactors.” And to aid the Japanese in this crisis, please donate to the Red Cross.)