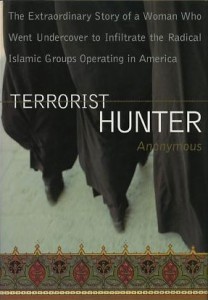 In 2003, HarperCollins published Terrorist Hunter: The Extraordinary Story of a Woman Who Went Undercover to Infiltrate the Radical Islamic Groups Operating in America. The book is as relevant today, if not more.

At the beginning of Terrorist Hunter the anonymous author, since outed as Rita Katz, has infiltrated a conference for radical Muslims. She asks herself why she is in a place where she (and her unborn baby) will probably die if anyone finds her recording equipment. Recalling her past, she goes on to answer that question.

Katz was born into a wealthy family of Jews living in the then-prosperous Iraqi city of al-Basrah. Her happy childhood changed dramatically after Israel soundly defeated the Arab nations that attacked it in the Six-Day War of 1967. Unable to match Israel’s military power, many Arabs began to take revenge on the Jews within their own borders.

After the Ba’ath Party of Saddam Hussein and his cousin Ahmad Hassan al-Bakr seized power the year following the war, they came for Katz’s father, falsely accused him of being a traitor and a spy for Israel, and began torturing him to extract a confession. Meanwhile, Katz’s family was moved into a small, guard-surrounded stone hut from which her mother would leave each day to beg for her father’s release—and to which she would return with fresh bruises bestowed by her husband’s captors. Sadly, her valiant effort was in vain. Katz’s father was well known, and his trial was scheduled to be shown on television. The Iraqi tyrants were determined to quench their Arab citizens’ thirst for vengeance by reaching a guilty verdict.

Because no amount of torture had hitherto pushed Katz’s father to confess to the crimes he had not committed, Ba’ath party agents invited his pregnant wife into a room he knew well—one in which, just the day before, another prisoner’s wife was beaten and gang-raped by many guards. The agents told Katz’s father that, if he refused to confess, they would immediately walk into that room, cut open her belly, and bring his unborn child to him on a tray.

Later that evening he walked to the stand and “in a clear, unwavering voice, confessed his crimes as an Israeli spy and a traitor to the Iraqi nation” (p. 25). He was hanged soon thereafter in Baghdad’s central square—to the cheers of a half million Iraqis.

Katz goes on to tell the story of her family’s daring escape from Iraq, which required her mother to drug the guards with Valium bought surreptitiously and then pretend to be the wife of a general in order to get a car ride to a town where they could be smuggled to safety. The remainder of their trek to safety involved hiding in the secret compartment of a chicken truck and walking across mountains with duct tape on their mouths to ensure that nobody made a sound. All this is told with the drama of a good novel. In fact, when Katz and her family are on the plane to Israel, and her little brother musters the courage to ask if it is finally OK to tell people they are Jews, you are likely to cry—just as everyone on that plane did.

Given this heart-wrenching setup, the reader can easily understand why Katz would risk her life to stop terrorists from endangering America, her country of choice and the safest place she thought she could ever be. Unfortunately, one of the key takeaways from Katz’s book is that America is not safe—certainly not as safe as she once thought. . . .