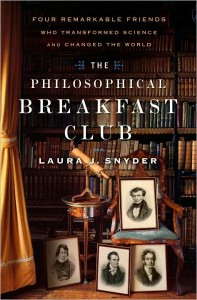 In The Philosophical Breakfast Club: Four Remarkable Friends Who Transformed Science and Changed the World, Dr. Laura Snyder contrasts the early 19th-century man of science (or “natural philosopher”) with the modern scientist. Yesteryear’s men of science were usually wealthy (often from an inheritance), pursuing their scientific interests with no support from a government, university, or corporation. Their discoveries, though long used by kings and governments, were rarely regarded as something that could improve the lives of ordinary men and women. The men of science would hardly ever meet, and they would never debate the merits of their work or papers publicly. Unsurprisingly then, they had reached no consensus as to a proper “scientific method,” and no single process of reaching theories was upheld above any other.

The modern scientist, by contrast, is a specialized, credentialed professional who usually works for a government or university while conducting research. This scientist routinely defends his work from contemporaries in the same field, is answerable to the public, and is even seen as a social reformer of sorts, capable of dramatically improving lives politically, economically, or socially. On top of it all, he adheres to a standard account of the scientific method, even as ongoing debates about the specifics of that method emerge and are assessed.

Who or what accounts for the transformation of the field of science and of its practitioners?

The dominant thesis of Snyder’s Philosophical Breakfast Club is that the efforts and achievements of four Cambridge graduates, friends, and men of science—John Herschel, Charles Babbage, Richard Jones, and William Whewell (pronounced “Who-ell”)—are largely responsible for our modern conception of what it means to be a scientist. To support her claim, she presents a biographical account of their lives, discussing their scientific, family, and social lives as well as their goals, personal interests, and the social context surrounding them. Each chapter presents aspects of what the four accomplished (or attempted to accomplish), along with the contextual background necessary to understand the importance of their work. The result is a clear view of the social and scientific atmosphere in which these men lived, and an even clearer understanding of exactly what they wanted to change in the world of science, and why.

These members of what Snyder dubs the “Philosophical Breakfast Club” would meet on Sundays while still students at Cambridge, often to discuss the writings of the man they considered the true father of science, Sir Francis Bacon. Bacon’s exhortations, that “knowledge is power,” that scientific knowledge should improve the conditions of life, and that a new method of inductive reasoning was needed to form true theories and advance science, heavily influenced these budding scientists. The problem, as the Philosophical Breakfast Club saw it, was that Bacon’s advice had generally been ignored since his days in the 17th century, resulting in stagnation in the field of science. To correct this problem, they vowed to reform science in fundamental ways. Snyder argues that their goals were to improve upon Bacon’s method of induction, to disseminate this new method, to demonstrate how scientific discoveries could be used to benefit society, and to create research institutions that were publicly recognized and funded by governments. (Although government-funded science has proven to be detrimental to both science and freedom, these men arguably were not in a historical and philosophic position to predict these negative consequences.)

John Herschel (1792–1871) was an extraordinary scientist, widely recognized as the greatest in his time. Snyder shows Herschel to be an astronomer continuing in the tradition of his famed father, William Herschel, namely by painstakingly cataloging and reconfirming 380 of the more than 800 double stars investigated by his father as well as more than 2,300 nebulae. He also invented the astrometer, which could measure the relative apparent brightness of a star from the observer’s position. As a chemist, he became the cofounder of photography by finding a chemical means to fix, or make permanent, images created by William Talbot’s photographic device. His importance in the field of photography was further cemented by his being the first man to make a photograph on glass, as well as the first to use water as a means of fixing a photographic image on paper, and by his coining the terms “photography,” “positive” and “negative” images, and “snapshot.” In the chapter “Dismal Science,” Snyder summarizes Herschel’s Preliminary Discourse on the Study of Natural Philosophy, a successful book that clearly explained the scientific method to a general audience, presented a version of Bacon’s method of induction to the reading public, and thus inspired a new generation of scientists, including the young Charles Darwin. . . .