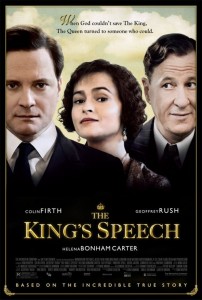 It is 1939 and England is in crisis—war looms, the government is in chaos, the people are in despair. All eyes turn to the country’s reluctant, recently crowned monarch, George VI, to offer stirring words that will brace them for the coming storm. But there’s the rub. The king suffers from a paralyzing stammer, and there are grave doubts that he will be able to deliver the speech that will unite his nation.

Tom Hooper’s Academy-Award winning The King’s Speech is much more than a simple, inspiring wartime tale of a historical figure overcoming a physical and psychological ailment. The story of how Albert, Duke of York, later King George VI, overcame his stammer to give a series of rousing wartime speeches that united and inspired his nation is indeed the framework of the film. But at its heart, the film is the story of the power of the human mind and how hard work and perseverance—not miracles and wishes—are the bulwarks of the human spirit.

The film opens in 1925. Albert (played by Colin Firth) must deliver the closing speech of the Empire Exhibition. The king’s second son is terrified. He is led to the podium where his speech will not only be heard by the assembled crowd but is being simultaneously broadcast across the Empire. The time comes, and in what can only be described as sheer agony, Albert chokes out the first few words. He is next seen several months later at a session with a so-called “speech therapist” who insists that smoking will “relax the throat” and that stuffing one’s mouth full of marbles is the “classic” cure for stuttering. Both remedies, unsurprisingly, fail.

Albert, with the help of his wife, Elizabeth (played by Helena Bonham Carter), eventually lands himself in the offices of Lionel Logue (Geoffrey Rush), an Australian speech therapist, who promises that he can help Albert (whom he insists on calling “Bertie” to the prince’s continuing disdain) overcome his stammer and speak clearly.

The eccentric speech therapist delivers. Through hard work, setbacks, and triumphs, Logue, with sometimes unusual therapeutic techniques and a wry bit of psychoanalysis, treats the prince and helps him rediscover the confidence and self-esteem that had been robbed from him during his bleak childhood. The efforts culminate in the pivotal speech that Albert, as king, must give. Success is the only option—and the psychological tightrope the king must cross during this moment is more compelling than any explosive action sequence one might imagine.

The King’s Speech is that rare cinematic gem that is filmic in the best sense of the word. Probably the most cinematic of the scenes comes early in the film. Albert has gone to Logue for a consultation, and the men quarrel. Stalking off, Albert takes a souvenir of his visit: a record of his voice reading Hamlet, recorded while loud music played so that neither Albert nor the viewer could hear his words while he was reciting them. Several weeks after the quarrel, Albert digs out the record, puts it on his turntable, and hears what he and we earlier did not: the prince reading without a stammer. It is a powerful scene, made more so as the camera pans from the dumbstruck prince to his speechless princess, who has walked into the room unbeknownst to her husband. The scene then cuts to Albert and Elizabeth back in Logue’s examining room. This short sequence’s natural, efficient construction, exemplifies the film’s overall narrative economy and emotional power. . . .