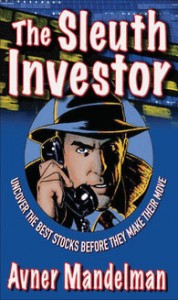 Many books on investing begin with complex instructions for analyzing a stock’s fundamentals or the blips that its price makes on a screen. Avner Mandelman, however, begins The Sleuth Investor: Uncover the Best Stocks Before They Make Their Move by simply describing what a company is and is not.

A company is not its legal charter, nor its annual report, nor its corporate filings . . . nor is it a string of historical prices that can be plotted together and regressed. Rather, a company is a group of people doing work in an office or a plant, so that other people (the customers) will send them checks. A company, in short, is a check-receiving work group. If the work group does good work, the other people (the customers) will send them lots of checks, and then the stock (which is a piece of the company you can buy) will rise. If the work group does bad work (or work that is not as good or as cheap as that done by other work groups), the customers will send fewer checks, and the stock will fall. (pp. 9–10)

This essentialized view of a company sets the stage for one of the most unique books on investing ever written. Mandelman emphasizes the importance to investors of having first-hand, exclusive information about a company’s people, products, plant, and periphery. A precautionary reason to seek out such information is to avoid investment losses: “If you invest in a company without knowing anything about its own specific drama, or characters, you’ll likely end up losing money” (p. 29). A proactive reason is to invest profitably—as Mandelman has done for decades at Giraffe Capital.

Mandelman first shows how to uncover exclusive data from those involved in a given company. He recommends establishing contact with the company’s cash makers—the people who “do the work for which customers send checks”—“chat with them often,” and visit the company (pp. 15, 19). Mandelman provides plenty of advice for beginning sleuths, including specific questions to ask management or oneself. When visiting the company, for example, he suggests asking of oneself questions such as:

Is the reception area decorated with samples of the company’s award-winning widgets and the CEO’s patent certificates, or with pictures of the CEO meeting movie stars and foreign leaders? In the first case, he serves the company; in the second, the company serves him. (p. 24)

That seemingly small detail is not available in press releases or annual reports. Yet Mandelman points out that such details can serve as crucial information when deciding whether you should invest in a company—just like an odd twist of the mouth or a single raised eyebrow from a nearby employee when management says they think the coming year’s sales will be good (p. 39).

According to Mandelman, a sleuth’s focus on people should not be limited to a company’s top employees. “In my experience,” he says, “low- and midlevel workers often know much more about their company than their bosses, yet many bosses rarely talk to the worker-bees, and even more rarely do they listen to them.” Because everyone likes to be listened to, however, Mandelman says that “if you just ask the workers questions with genuine interest, it’s likely that they’ll tell you whatever you want to know” (p. 139). . . .

View all articles by Daniel Wahl →
Letter to the Editor
Review: The Philosophical Breakfast Club, by Laura J. SnyderThe Spring 2011 Issue of TOS
Return to Top