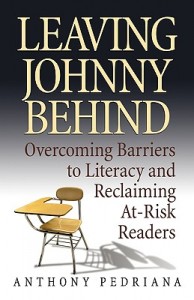 Conscientious parents and teachers have long wondered why so many educators are hesitant to teach phonics despite its known successes. Anthony Pedriana’s Leaving Johnny Behind: Overcoming Barriers to Literacy and Reclaiming At-Risk Readers answers this perennial question and explains how the educational community shifted from teaching reading based on phonics (alphabetic code) to the “whole-word” or “whole-language” approach.

Pedriana’s book is based on his thirty-five years of experience in education, first as a public school teacher and later as a principal in Milwaukee’s inner-city schools. Although initially committed to the whole word approach—by which students are taught to recognize word shapes rather than word components—he became increasingly frustrated at his students’ lack of reading progress. When a new teacher promised him that she could have every one of her second graders reading at grade level by the end of the year—if he permitted her to use a phonics-based approach called “Direct Instruction”—Pedriana gave her the green light. He was soon astounded by her progress: Even though many of her students were already a year behind, the teacher, using the phonics approach, had 95 percent of her class reading at grade level by the end of the year.

Having witnessed these results, Pedriana wanted all of his teachers to use the “Direct Instruction” method. Although he expected some resistance, he was surprised at how strongly many of the teachers opposed the program and implemented it only halfheartedly. Over the next few years, with the phonics program in place, Pedriana saw some gains made in reading at his school. But without the teachers putting forth the requisite effort and follow-through, these gains were negligible compared to what that one enthusiastic teacher had achieved, and Pedriana accordingly suffered much criticism for the program.

Pedriana soon retired but could not stop thinking about these events. He wanted to understand why a program that promised to help so many students was opposed by teachers, and he wanted to be able to answer critics of the program. Leaving Johnny Behind is the result of his search for answers.

Pedriana details how the conflict over how to teach reading in America unfolded, tracing its beginnings to the mid-1800s. Some educators at the time thought schools were too strict and rigid (indeed, schools of the day often harshly disciplined and ridiculed students). One concerned educator, Horace Mann, secretary of the Board of Education in Massachusetts, visited a school in Germany that was using what he regarded as kinder, gentler techniques to teach students to read, such as displaying helpful pictures above the words being taught so that students would associate the way the word looked with the concept it represented. “Mann found such tactics tailor-made to his progressive agenda that sought to foster literacy through kindness, respect and various other child-centered curriculum” (p. 37). Mann returned to America and began advocating a change in U.S. schools. . . .

Laura Hilse has a BS in communication studies from Northwestern University and a Masters in Montessori education from Xavier University in Cincinnati. After teaching for many years in Montessori-based classrooms, she now works as a private reading and math tutor.

View all articles by Laura Hilse →
Letter to the Editor
Are "Chinese Mothers" Superior?From the Editor, Spring 2011
Return to Top