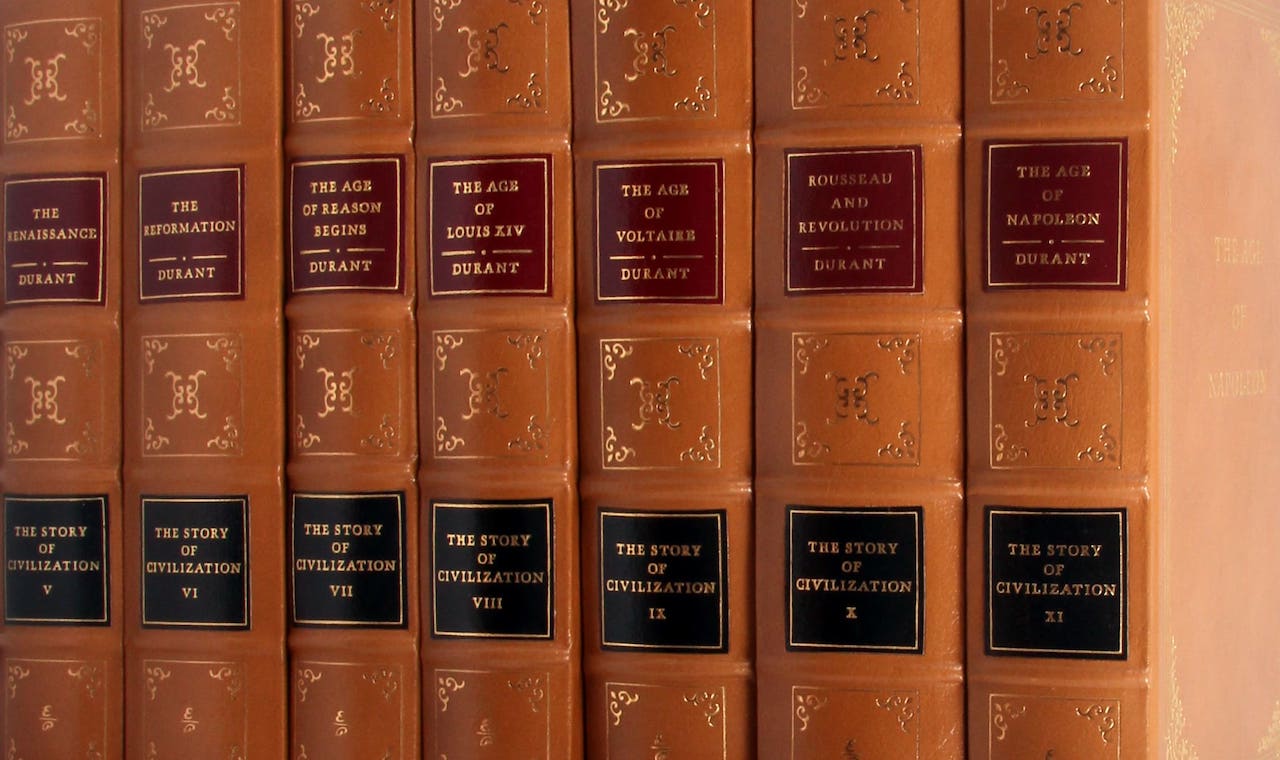 A Symphony of History: Will Durant’s The Story of Civilization

Eleven years ago, toward the end of my undergraduate years as a philosophy major at the University of Virginia, I was feeling dissatisfied with my knowledge of history. I had taken several history courses but wanted more. Because my immediate interest was ancient Greece, I decided to try a friend’s recommendation, The Life of Greece by Will Durant. Finding the book at the library, I was surprised to see that it was but one volume in a massive series called The Story of Civilization—eleven substantial volumes spanning two feet of shelving.1 Although I wanted to learn more about history, I wasn’t sure I wanted to learn that much. It turned out that I did. Reading those volumes—sometimes poring over large portions of them multiple times—would be one of the most enlightening and enjoyable experiences of my life.

First published between 1935 and 1975, The Story of Civilization is a work of great and enduring value. Exceptional for its masterful prose as well as its size and scope, the Story is a powerful combination of style and substance. An author of rare literary talents, Durant (1885–1981) won a wide readership through his ability to make history intriguing, lively, and dramatic. His volumes, intended for the general reader and each designed to be readable apart from the others, have sold millions of copies. Some even became best sellers, and the tenth volume, Rousseau and Revolution, won a Pulitzer Prize. Individual volumes have been translated into more than twenty languages.2

Having earned a doctorate in philosophy in 1917 from Columbia University, Durant first won fame and phenomenal success with The Story of Philosophy (1926). This book sold two million copies in a few years and has sold three million copies to date; eighty-five years later, the book is still in print and has been translated into nineteen languages.3 Durant followed this book with another best seller, The Mansions of Philosophy (1929).4 His earnings from these and other books, as well as from articles and public lectures, helped free his time for writing The Story of Civilization, which would be his magnum opus. His wife, Ariel Durant (1898–1981), assisted him throughout his writing of the Story, her assistance increasing to the point that, beginning with the seventh volume, she received credit as coauthor.5

The Story of Civilization begins with Our Oriental Heritage, a volume on Egypt and Asiatic civilizations. The remaining ten volumes tell the story of Western civilization (with a substantial treatment of Islamic civilization in one of the volumes6). Durant’s original intention was to tell the story of the West up to the present, but, despite working on the Story for more than four decades, he was unable to do so: “[A]s the story came closer to our own times and interests it presented an ever greater number of personalities and events still vitally influential today; and these demanded no mere lifeless chronicle, but a humanizing visualization which in turn demanded space” (vol. 7, p. vii). The increasing space he gave to each period of European history resulted in his having to end the Story with the downfall of Napoleon in 1815; moreover, he had to omit the history of the Americas entirely. He was ninety when the Story’s last volume was published and had carried it as far as he could.

In each volume Durant takes a comprehensive approach, covering, for each nation and in each period of its history, all the major aspects of civilization: politics, economics, philosophy, religion, literature, art, and science.7 He called his approach the “integral” or “synthetic” method, and regarded it as an original contribution to historiography.8 Elaborating on the origin of his method, he writes:

I had expounded the idea in 1917 in a paper . . . “On the Writing of History.” . . . Its thesis: whereas economic life, politics, religion, morals and manners, science, philosophy, literature, and art had all moved contemporaneously, and in mutual influence, in each epoch of each civilization, historians had recorded each aspect in almost complete separation from the rest. . . . So I cried, “Hold, enough!” to what I later termed “shredded history,” and called for an “integral history” in which all the phases of human activity would be presented in one complex narrative, in one developing, moving, picture. I did not, of course, propose a cloture on lineal and vertical history (tracing the course of one element in civilization), nor on brochure history (reporting original research on some limited subject or event), but I thought that these had been overdone, and that the education of mankind required a new type of historian—not quite like Gibbon, or Macaulay, or Ranke, who had given nearly all their attention to politics, religion, and war, but rather like Voltaire, who, in his Siècle de Louis XIV and his Essai sur les moeurs, had occasionally left the court, the church, and the camp to consider and record morals, literature, philosophy, and art.9

Durant’s integral history does not only occasionally consider these latter areas (which he calls “cultural history” or “the history of the mind,”)10 it emphasizes them. “While recognizing the importance of government and statesmanship, we have given the political history of each period and state as the oft-told background, rather than the substance or essence of the tale; our chief interest was in the history of the mind” (vol. 10, p. vii). (Nevertheless, the Story contains ample and excellent material on politics.)

The Story is by far the most massive and thorough treatment of Western civilization by a single author (or team of two) that I have been able to find. Large teams of historians have collaborated to produce similarly large, or even larger, works. But such works, writes a respected historian, “while they gain substantially in authoritative character, are seriously lacking in correlation and are not written from a . . . harmonious point of view.”11 Harmony is indeed one of the cardinal virtues of Durant’s work; readers find therein a beautifully integrated tale of man’s past, a veritable symphony of history. For this reason and others—notably, Durant’s grand, philosophical overviews and scintillating style—I believe that many, and perhaps most, readers will find no better place to turn for a large treatment of Western civilization than The Story of Civilization. . . .

Dan Norton has a Ph.D. in philosophy (University of California, Davis, 2019) and studied many years at the Ayn Rand Institute in the undergraduate and graduate programs of its Objectivist Academic Center (the predecessor of Ayn Rand University). He currently works to advance Ayn Rand’s philosophy of Objectivism on YouTube (https://www.youtube.com/DanNorton1), Facebook (https://www.facebook.com/dan.norton.1428/), and Twitter (https://twitter.com/dannorton111).

View all articles by Dan Norton →
Letter to the Editor
Walt Disney’s EPCOT: The City of Tomorrow that Might Have BeenReview: Atlas Shrugged: Part I

Acknowledgments: I am grateful to Drs. Steve Jolivette and Marc Baer, for their encouragement and for their extraordinary generosity in providing feedback on drafts of this essay. The essay has benefited greatly from their comments.

2 The number of translations is noted on the jacket of some printings of some volumes of the Story. Multiple jacket and cover designs have appeared since the volumes were first published. A leather-bound collector’s edition is available from Easton Press, Norwalk, Connecticut.

4 Later revised and reissued as The Pleasures of Philosophy (1953).

5 In A Dual Autobiography (New York: Simon and Schuster, 1977), by Will and Ariel Durant, Ariel elaborates on her contribution, which included debates with Will on “points of interpretation and allotment of space; Will yielded to me on some matters, but I recognized him as my master, and was content that the last form of our work should bear the grace of his style and the wink of his wit” (p. 338). Because Will Durant played the dominant role, I will, for ease of reference, speak of him throughout the essay as if he were the sole author.

7 Durant’s lists of areas to be covered vary from preface to preface. He sometimes includes such areas as manners, morals, law, music, government, statesmanship, and education. But usually the variations can be subsumed under one of the areas I have listed here.

9 Durant, Dual, pp. 138–39. I question Durant’s claim to originality, but the quote at least eloquently expresses the approach he took, which is the main point here.

10 Although religion is not one of the “latter areas” that Durant lists in the passage above, he does include it in his conception of “culture.”

12 Excerpted from a dialogue (hence the quotes around the block quote) between a Catholic, a Protestant, and a humanist; the humanist (who represents Durant’s view, cf. Durant, Dual, p. 347) is speaking in this passage.

13 Durant takes this quote from Albert Guérard’s The Life and Death of an Ideal: France in the Classical Age (New York: Charles Scribner’s Sons, 1928), p. 18.

14 This is the title Durant uses for one of the main divisions of his volume (chapters 17 through 23).

15 Dr. Jolivette kindly agreed to write this statement specifically for inclusion in this essay.

16 Durant’s stress on the role of philosophy in history puts him in agreement (at least oftentimes) with Ayn Rand’s philosophy of history, according to which history is fundamentally moved by philosophic ideas.

20 Durant, “Letters to the Editor: Will Durant Replies to James H. Breasted: Interpreting the Orient,” Saturday Review of Literature, August 3, 1935.

23 Even in the best of his grand overviews I can usually find points, formulations, and emphases to quarrel with (thus, some of the ellipses in the passages presented earlier).

30 The quote appears on the jacket of some printings of some of the volumes of the Story, for example, the eighth printing of volume 6.

32 The quote appears on the jacket of some printings of some of the volumes of the Story, for example, the eighth printing of volume 6. It is a shortened and slightly modified version of a letter (October 24, 1944) from Maeterlinck to Durant, which is reproduced in Durant, Dual, pp. 230–31.