“One of the saddest days of my life was when my mother told me ‘Superman’ did not exist. ‘Cause even in the depths of the ghetto you just thought he was coming. . . . She thought I was crying because it’s like Santa Claus is not real. I was crying because no one was coming with enough power to save us.” —Geoffrey Canada, Waiting for “Superman” 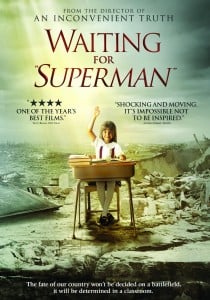 The documentary Waiting for “Superman” examines America’s failing public education system and calls on Americans to do something about it. Writer/director Davis Guggenheim takes viewers through the entrails of our public schools, showing the horrifying experiences of students across the country (mostly fifth and eighth graders), exposing the policies that led to those experiences, and providing statistics that measure the extent to which our public school system has failed. As part of the exposé, the movie includes several compelling interviews with educators, addressing issues such as the failure of the No Child Left Behind program, the purpose and effects of teachers’ unions, the incredibly high dropout rates among public school students, and the impact of failing schools on our economy and society.

Politically, Guggenheim is clearly left-leaning: He also directed the environmental propagandist documentary An Inconvenient Truth featuring Al Gore. But Guggenheim admits in the opening minutes of Waiting for “Superman” that, when “faced with the reality” of public school education, he betrayed his own values and sent his kids to private school. Given the reality he exposes in the documentary, one can hardly blame him.

One of the movie’s findings is that, over the past few decades, the money spent on public education in America has increased dramatically while the quality of education has plummeted. For example, according to the film, the money spent per pupil rose from $4,300 in 1971 to more than $9,000 today (figures adjusted for inflation). Yet, despite this enormous increase in funding, students’ reading and math scores have dropped significantly. The movie contends that 70 percent of eighth graders today cannot read at grade level and that, among thirty developed countries, the United States now ranks twenty-fifth in math and twenty-first in science.

Sean Saulsbury produces and co-hosts a movie review show called The Movie Film Show and hosts an audio podcast on business called The Independent Entrepreneur. He maintains a blog at www.seancast.com.

View all articles by Sean Saulsbury →
The Conclusion of Loving LifeReview: Burzynski: The Movie, directed by Eric Merola