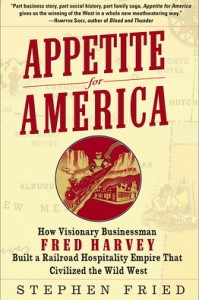 Granted, the subtitle of Appetite For America: How Visionary Businessman Fred Harvey Built a Railroad Hospitality Empire That Civilized the Wild West is hyperbolic, but author Stephen Fried’s narrative makes a strong case for Fred Harvey’s immense contributions to America’s westward expansion. Fried tells how Harvey and the two generations of Harveys that succeeded him pioneered and developed many business and marketing concepts still in use today.

Fried first covers Harvey’s early years, from his 1853 arrival in New York—as a seventeen-year-old Englishman with only two pounds in his pocket—to his initial venture into food service, which ended when his partner, a Confederate sympathizer, absconded with all their money and left him to start over at twenty-six. Fried next shows Harvey working on packet boats and as a railroad agent, earning the respect of those with whom he worked and formulating the plans for his next venture in food service.

As Fried tells us, Harvey, during his constant railroad travel as an agent, noticed that the food and service at train depots was awful (and often unscrupulous), and he knew he could do better. Thus began Harvey’s initial steps toward the construction of his hospitality empire. Because of Harvey’s excellent relationships with the railroad executives with whom he had worked and his knowledge of the food service business, he and a partner were able to operate three eating houses along the Kansas Pacific Railway. Although these establishments were successful, Harvey soon decided to go out on his own and start the company that would bear his name.

Fried shows that the drive to innovate was part of Harvey’s nature, recounting how he insisted that his Fred Harvey eating houses use the freshest ingredients—which he had shipped by refrigerated rail car. Further, Harvey recognized the importance of retaining the talented chefs he hired, and thus gave them discretion with recipes and even encouraged them to make deals with provisioners in their respective areas to acquire interesting game and produce. Fried shows that the improvements Harvey made to the railway eating house experience were immensely successful, and he covers the amazing expansion of Harvey’s company, which, by the time he died in 1901, was serving travelers in all the eating houses along the Santa Fe line, from the Midwest to California.

Interestingly, as Fried recounts, the old maxim “shirtsleeves to shirtsleeves in three generations” did not apply to the Harvey family. Indeed, the business successfully passed through four generations of Harveys. After Fred Harvey’s death, his son Ford managed the company and drove it to new heights. Fried notes that Ford, like his father, was intelligent, innovative, hardworking—and, especially, cognizant of the immense value of his employees. . . .

Jules Klapper is a businessman based in Santa Fe, New Mexico.

View all articles by Jules Klapper →
Letter to the Editor
Review: The Dhandho Investor, by Mohnish PabraiReview: Mind Over Mood
Return to Top