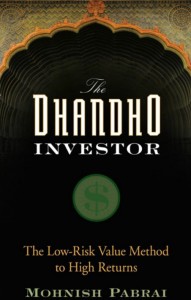 “From a standing start as refugees with virtually no capital, a person with the last name Patel today owns one out of every five motels in the United States” (p. 132). According to hedge fund investor Mohnish Pabrai, one word identifies how these Indian immigrants have achieved this extraordinary success in a little more than thirty years: Dhandho.

Dhandho (pronounced dhun-doe) is a Gujarati word. Dhan comes from the Sanskrit root word Dhana meaning wealth. Dhan-dho, literally translated, means “endeavors that create wealth.” The street translation of Dhandho is simply “business.” What is business if not an endeavor to create wealth? (p. 2)

In The Dhandho Investor: The Low-Risk Value Method to High Returns, however, Pabrai uses the word more narrowly to describe the low-risk, high-return approach to business taken by the entrepreneurial Patels.

According to Pabrai, the first Patels arrived in America in the mid-1970s with strange accents and nowhere to live. At the time, owing to a recession and gasoline rationing, the motel industry was suffering from drastically low room occupancy, and many motels were either for sale or in foreclosure. To the Patels, who saw that the banks would finance motel purchases for anyone with roughly $5,000, this circumstance represented an opportunity. According to Pabrai, the average “Papa Patel” sized up the situation this way:

Papa Patel figures the family can live in a couple of rooms, so they have no rent or mortgage to pay and minimal need for a car. Even the smallest motel needs a 24-hour front desk and someone to clean the rooms and do the laundry—at least four people working eight hours each. Papa Patel lets all the hired help go. Mama and Papa Patel work long hours on the various motel chores, and the kids help out during the evenings, weekends, and holidays. Dahyabhai Patel, reflecting on the modus operandi during the early days, said, “I was my own front-desk clerk, my own carpenter, my own plumber, maid, electrician, washerman, and what not.” With no hired help and a very tight rein on expenses, Papa Patel’s motel has the lowest operating cost of any motel in the vicinity. He can offer the lowest nightly rate and still maintain the same (or higher) profitability per room than his predecessor and competitors. As a result, he has higher occupancy and is making super-normal profits. (p. 7)

Before those profits, Pabrai notes, all Papa Patel had was $5,000 and the knowledge of possible outcomes that could follow if he invested it in a motel. For instance, one possibility was that by drastically cutting expenses to $30,000 per year and cutting rates to achieve at least 50 percent occupancy, he would generate $50,000 in annual revenue—leaving $20,000 in profits, or a 400 percent return on his $5,000 investment. Another possibility was that, if the recession got much worse and Papa Patel could not convince the bank to work with him to avoid foreclosure, he would lose his investment of $5,000, much—if not all—of which would have gone to rent and other associated expenses anyway, had he not purchased the motel.

After considering his alternatives, Papa Patel thinks a successful outcome is likely and the second option, foreclosure, extremely unlikely. So he purchases the motel. With the obvious benefit of hindsight, Pabrai cheers the move. “This is not a risk-free bet,” he says, “but it is a very low risk, high return bet. Heads, I win; tails, I don’t lose much!” (p. 12). Or, in a word: Dhandho. . . .

View all articles by Daniel Wahl →
Review: How Barack Obama is Endangering our National Sovereignty, by John R. BoltonReview: Appetite for America, by Stephen Fried
Return to Top