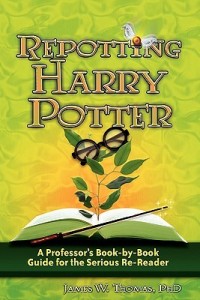 Professor of Literature James W. Thomas holds that there are “plenty of rewards and surprises” to be gained by rereading one’s favorite books (p. i). And in Repotting Harry Potter: A Professor’s Book-by-Book Guide for the Serious Re-Reader, Thomas convincingly elucidates the kinds of gems to be found.

Toward that end, he analyzes the seven books in J. K. Rowling’s famed Harry Potter series, dividing each into manageable sections (often covering several chapters) and pointing out various instances of foreshadowing, symbolism, external references, and humor that Rowling incorporates into each. Understanding and looking for these literary techniques, says Thomas, makes reading and especially rereading great works of fiction all the more enjoyable.

Foreshadowing is literary hinting . . . and, as Rowling probably learned from her favorite author Jane Austen and others, foreshadowing can be straightforward (whatever is hinted at or mentioned will come to fruition later as hinted at) or ironic (we’ll hear of this again, but certainly not in the same way we thought). In the seven-book series, Rowling foreshadows things that will happen or will matter or will be mentioned again later in the book at hand—ranging from a few pages later to several hundred pages later. In addition, she is adept at foreshadowing things that will happen many books later, thousands of pages later in fact. With regard to the nature of foreshadowing, incidentally, the Russian writer Anton Chekhov observed that if the playgoer sees a gun in Act 1, that gun had better go off before the final act. By the end of Book 7 a lot of Rowling’s guns have been fired, whole arsenals of them. (p. 11)

Some of Thomas’s best examples of Rowling’s foreshadowing cannot be shared without spoiling the series for those who have not yet read the books, but others include: an offhand remark that one would have to be mad to rob a certain bank foreshadows its being robbed (p. 12); a villain’s boast that “many of [his] followers would give their right hands” to help him foreshadows the actual loss of someone’s right hand (p. 139); and Rowling’s lingering on a “huge pudding with whipped cream and sugared violets” foreshadows its coming importance (p. 52).

One of the most enjoyable aspects of Repotting Harry Potter is the humor that Thomas finds in and brings to his analysis of the Potter series. For example, he describes the scene in which the Chekhov’s “gun” of a huge pudding “goes off” as the “kitchen splat heard round the dining room” (p. 52). He says, about one of the other foreshadowings noted above, “I love it when a figure of speech is rendered literal in a later scene (as long as it’s not my right hand that’s involved)” (p. 139). And his enthusiasm for Rowling’s humor is infectious:

Don’t you like the accountant joke in Chapter 6 [of the Sorcerer’s Stone]? Harry asks if the whole greater Weasley family is magic—and the answer is yes, except for that second cousin of Molly’s. He’s not only non-magic; he’s an accountant, and we “never talk about him.” (p. 17)

Much of Rowling’s humor and wit is bound up in the words she uses—and Thomas seems to love sharing every instance of such wordplay that he can find. For example, when someone offers Harry help opening a mysterious egg, he declines, responding that a “couple more days should crack it” (p. 159). When the minister of magic, Cornelius Fudge, threatens to visit the prime minister of England, Rowling writes that the British leader “had quite enough on his plate already without any extra helpings from Fudge” (p. 233). And then there is “Golpalott’s Third Law”: . . .

View all articles by Daniel Wahl →
Letter to the Editor
Review: Mind Over MoodGive the Gift of TOS
Return to Top