Mind Over Mood: Change How You Feel by Changing the Way You Think, by Dennis Greenberger and Christine A. Padesky. New York: The Guilford Press, 1995. 215 pp. $23.95 (paperback). 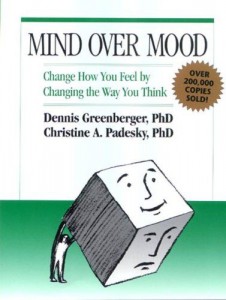 It may seem unimaginable now, but someday you will look back and be thankful for whatever is angering you or making you anxious today—if, that is, such problems, in conjunction with this book review, inspire you to a study of Mind Over Mood: Change How You Feel by Changing the Way You Think. In their book, Dennis Greenberger and Christine Padesky teach skills that enable you to understand your emotions and make fundamental changes in your moods, behaviors, and relationships.

Greenberger and Padesky are cognitive therapists; as such, they emphasize the importance of thoughts and thought processes in one’s emotional well-being, holding that consciously recognizing one’s emotional states is the precondition to improving them. “Awareness,” they say, “is the first step toward change and better problem solving” (p. 49). Consider Vic, one of four persons whose progression is followed in the book:

When Vic learned that his primary emotional difficulties were with anger and anxiety, he began to focus his attention on the situations in which he felt angry or anxious. He learned to distinguish his irritable anger from the fearful worry of his anxiety. He began to identify these moods, instead of lumping them together as “numbness.” As Vic began to isolate what he was feeling, it became apparent to him that when his mood was anxious he was thinking “I’m losing control.” When his mood was angry, he was thinking, “This is not fair—I deserve more respect.” (p. 28)

In Vic’s case, it was not enough simply to become aware of his moods and the “automatic thoughts” that led to them. (The authors define “automatic thoughts” as thoughts that “simply pop into our heads throughout the day.”) But doing this was a crucial first step—one that, as Greenberger and Padesky show, anyone seeking to make profound emotional change simply cannot skip.

Having identified the main automatic thought underlying a mood—what they call the “hot thought”—Greenberger and Padesky advise readers to gather evidence. “[It] is helpful,” they say, “to consider your hot thoughts as hypotheses, or guesses. If you temporarily suspend your conviction that your hot thoughts are true, you will find it easier to look for evidence that both supports and weakens your conclusions” (p. 65). This process of evidence gathering, they continue, clarifies one’s thinking and reduces the intensity of one’s moods.

Throughout this process, Greenberger and Padesky teach readers to focus on data, information, and facts. Although this skill is really no different from good, objective thinking, they call it “alternative or balanced thinking” to usefully differentiate it from certain widespread and problematic methods. As they explain: